Thanks to cmac2012 for pitching this show.

You’ve gotta love bees. They make honey. They dance. They inspired “Flight of the Bumblebee.”

Just one species of bee — the honey bee — pollinates billions of dollars of crops in the United States every year, enough so that bands of roving apiarists (the technical term for beekeeper) tow tractor trailers of bees to meet commercial demand. Hordes of aspiring beekeepers swap war stories on online forums like Beesource. The honey bee is Utah’s official insect. (Mormon settlers originally wanted to name the state “Deseret,” after the Mormon name for the honey bee.) And as we discovered during our story meeting, it’s dangerously easy to get hooked on Beedogs.com.

But honey bees are only the beginning. About a third of the human diet relies on pollinators to get to the table, and most of those pollinators are some kind of bee. (According to the UN, species of wild bees fertilize the majority of the food crops eaten by humans worldwide.) In the US, the most common bees are solitary sweat bees, which are attracted to human perspiration. Alfalfa farmers use the alfalfa leafcutter bee to pollinate their crop. The state of Maine has its very own bee, the Maine blueberry bee. All told, there are at least 16,000 different kinds of bees on the planet, ranging from social swarmers to solitary misanthropes that live underground or in hollow reeds. There are so many that it took Charles D. Michener, the E.O. Wilson of bees, almost a thousand pages to describe them all in Bees of the World.

Recently, beekeepers and scientists have noticed that a mysterious scourge, colony collapse disorder, is causing honey bees across the United States to disappear without a trace.

The bees are disappearing in an unusual manner, just apparently leaving the hive and not coming back — en masse — even though honey, pollen, and larvae are at the hive. One possible explanation is the use of new pesticides. Whatever the cause, this highlights the fragility of our natural systems and points to the need for greater care in how we treat them.

Theories vary about why the honey bees are disappearing. Some guess that the bees have contracted a new contagious disease. Others argue that it’s the fault of electromagnetic waves. Some think it’s pesticides. One thing is clear: we don’t know much about an insect that’s vital to our everyday lives. 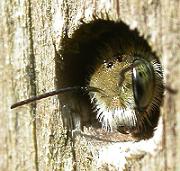 The honey bee crisis might be a symptom of a much larger problem: many species of wild bees also seem to be disappearing. In October, the National Research Council sounded the alarm in a report called The Status of Pollinators in North America. The United Nations has set up an International Initiative for the Conservation and Sustainable Use of Pollinators to study why pollinators like bees are vanishing, and there’s a North American Pollinator Protection Campaign. At least one scientist, Stephen L. Buchmann, is predicting an “impending pollination crisis” in his book, The Forgotten Pollinators.

Do you think that the disappearance of pollinators like the honeybee is an early warning sign of environmental end times? Will man-made pollinators someday replace bees in the production of our food? Has a nasty sting given you apiphobia? Have you tried your hand at beekeeping? And wouldn’t you like to meet the Shaggy Fuzzyfoot bee?

Acting apiarist for the state of Pennsylvania

And thanks to Nick and Ben for originally suggesting Bernd Heinrich as a guest. He didn’t make it onto our new zoology show, but he’ll be our guest twice this week!

Cindi, Some nice memories, Cindi’s Blog, December 26, 2006: “Whether it was an orientation flight or her maiden mating flight, I probably will never know. I could not believe my eyes, such a beauty she was, so big, and so much a wonder of nature. I only saw her for a couple of seconds; she was in such a hurry to go home, to her beautiful girls in waiting. Ah, the life of the queen.”

Peter Dearman, Please Lord, not the bees, Guerrilla News Network, May 02, 2007: “Among the various mythologies of the apocalypse, fear of insect plagues has always loomed larger than fear of species loss. But this may change, as a strange new plague is wiping out our honey bees one hive at a time.”

Prague Twin, The Buzz (or lack of it), Prague Twin, April 24, 2007: “…seriously, it is time to panic. That, and that this type of event reminds us all that we live in an ecosytem that is interconnected. We can go on killing everything around us and destroying our environment, but some day, it is going to bite us back.”

Phang, I Believe in Living Sunlight, City Bees, April 17, 2007: “…bees actually make me confront some of the principles I hold for convenience and comfort, rather than for the sake of truth. It splits apart the relationship with truth and false faith, where you cleave to a belief for reasons other than thinking that the force of life within you really supports it…I cannot love the bees without accepting their brutality, I cannot understand the cruelty without the beauty. How else can a person understand themselves?”

Bug_girl, Bees, Disease, and BS, Bug Girl’s Blog, April 29, 2007: “In the words of a recent news release from a beekeepers conference, the colony deaths have been blamed on just about anything, including ‘power lines, cell phones, and Martians.’ My favorite explanation is that the bees have been raptured.”

Thanks to rahbuhbuh for suggesting Bug_girl.

A friend used to joke to me that we’re like a bunch of prostitutes. We go to a farmer and negotiate for the lowest price possible. He doesn’t...