You may not know what a theremin is but you’ve no doubt listened to one. You’ve heard its unearthly voice in sci-fi flicks, its haunting tremor in horror films, and its groovy wobbliness in the Beach Boys’ hit Good Vibrations. But long before the theremin reverberated throughout American pop-culture it was known to all of Russia as that ethereal vibrato in classical music.

Romancing a theremin doesn’t come easy. Unlike the family piano or the ubiquitous guitar it is an instrument that is hard to come by; you often have to assemble it yourself or at the very least track one down online. And the appeal of the theremin is not just its distinctive sound — it’s that it is literally a hands-off instrument. To play the theremin you have to move your hands around the two metal antennae, which control the Theremin’s pitch and volume. The very act of summoning sound from the ether practically transports the Theremin player to another dimension. 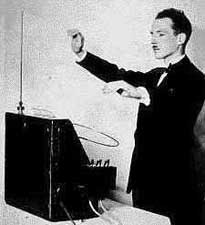 The theremin’s sound — the primal scream when music first met electricity — is not nearly as idiosyncratic as its history. In 1919 Leon Theremin, a Russian physicist, invented the wonderfully wacky instrument while researching proximity sensors for the Russian government. After the Theremin received rave reviews at the Bolshevik Era equivalent of Macworld, Vladimir Lenin invited Theremin to play the instrument bearing his name. Lenin was so wowed by the theremin that he took lessons, commissioned 600 theremins to be distributed throughout the Soviet Union, and insisted that Leon Theremin trek across the globe to flaunt this latest breakthrough in Soviet technology.

The passion for the theremin is a flame that has never died and for many it is burning brighter than ever. The 1993 documentary Theremin: An Electronic Odyssey revived interest in the exotic instrument and spawned a new generation of thereminists, like The Lothars.

Have you fallen under the theremin’s spell? Do you have a passion for it as one who plays it? As one who listens to it? What does it feel like to find the instrument that is right for you? If you could give a piece of music the Theremin treatment what would it be?

If you are in the Boston area on April 23, Pamelia is performing at The Enormous Room in Central Square. For those of you who live elsewhere here’s a list of her upcoming shows.

Thanks to Ralph638s for suggesting Pamelia Kurstin.

Professor of Composition, The Boston Conservatory

overgrownpath, Theremin and variations on the moon, On An Overgrown Path, March 1, 2007: “But in an email exchange Armstrong identified the cassette of ‘ strange electronic-sounding music’ that fellow Apollo 11 astronaut Michael Collins had reported him taking to Luna. The cassette in question was transcribed from Neil Armstrong’s own LP of Music Out of the Moon featuring Dr Samuel Hoffman. Author Andrew Smith decribes the theremin played by Hoffman on this album, and gives a short history of this unique instrument which mainly relates its use in rock music.”

Jon Bernhardt, A Somervillain Thereminist in White Castle’s Court (Day 2, Electric Boogaloo), Wobbly Music, February 20, 2007: “I sat with the ad people and asked them something that I’d been dying to know: How did they get the idea for the ad? Did they want to have a theremin player singing a song, so they searched youtube and found me? Or did they come up with the concept after stumbling upon my youtube video?” Read the full saga here.

Jen Hammaker, Technique 1, Theremin Major, April 6, 2007: “In the same vein, I’m glad all of us thereminists are developing a vernacular. So for anyone who is a discussion-type, I’m gonna run down some topics on theremin technique and briefly sum up what I’ve learned so far on the topic.”

Olivia Mattis, An Interview with Leon Theremin (conducted 1989), Thereminvox, October 5, 2002: “I showed him the signaling system of my instrument, which I played by moving my hands in the air, and which was called at that time the thereminvox. I played a piece [of music]. After I played the piece they applauded, including Vladimir Il’yich [Lenin], who had been watching very attentively during my playing.”

Tom Polk, Theremin? Tannerin? What’s the difference?, TomPolk.com: “In 1966, “Good Vibrations” by the Beach Boys hit #1 on the music charts, wowing listeners worldwide with its distinctive electronic sweeps and trills never before heard in pop music. For years listeners have asked ‘What is that sound?’ Was it a theremin? No, it was not a theremin.”

ndj, in a comment on Open Source, March 13, 2007: “How about a Nintendo Wii theremin hack! For those who were living in a cave this past Christmas, the new Nintendo Wii was THE gift to get or receive no matter your age. It uses wireless controllers called “wii-motes” that the player waves around to interact with a game. I played with a Wii for the first time today, and it is amazingly sensitive to motion in any direction or orientation.”

VeritasRox, in a comment on Open Source, April 18, 2007: “It would be great to further explore the links between the theremin, electronic music, and dance. Theremin’s wife was part of a dance company that experimented with choregraphy generated in the midst of a theremin-like electronic field. Performing such dances demanded incredible awareness and body control, as slight variations in position would be registered as significant variations in sound.”

Jon Bernhardt, of The Lothars, has had a crazy few months. Over a year ago he posted a YouTube video of himself playing “Video Killed the Radio Star” on his...

The Haunting Tones of the Open Source Theremin

In case anyone was wondering, this is what my theremin sounds like. The part that sounds like the theme music to Sonic the Hedgehog is the “discrete mode,” which chops...