[Recording at 5pm EST so Mike Roylance can make it to his BSO concert tonight!]

The tuba player is normally a stocky, bearded guy whose hobby is plumbing. The only member of the orchestra who bowls over 250 and gets his deer every year and changes his own oil. In his locker downstairs, he keeps a pair of lederhosen for free-lance jobs. Anyway, there’s only one tuba in the bunch and he’s it.

Much celebrated, much maligned, those who throw in their lot with the tuba section can usually expect a life of supporting roles. Playing tuba isn’t too different than playing bass guitar in a rock bands, except that you’re lugging around 15-30 pounds of shiny brass. But recently, tubas have started to come into their own. Tuba maestros like Roger Bobo and Oystein Baadsvik take the noble grace of the french horn and add backbone, and they’re blasting their way into major solo parts.

On Tuesday, we’ll talk tubas with Chris’s old friend Eli Newberger and Boston Symphony principal Mike Roylance. Until then, we’ll be recording as many of your stories as we can.

We know you have tuba stories. The back aches. The grumpy downstairs neighbors. The things that have gotten stuck inside.

You started playing because you didn’t want to fight for first chair, or because your band director begged you to, or because she told you it was a saxophone. Growing up, you had to hang it from ropes thrown over ceiling beams to play it. Once you wanted the world to notice you. Now you’re on a mission to prove that you’re more than just “oompahpah”s.

Today in orchestra, we played the finale from Sibelius’s Second Symphony. I enjoyed every minute of it. For those of you who have not played it before, there is a part near the end where the tuba comes in, going from high to low D, and then from G to D. When we got to that part, the director shouted ‘Go, Big Dog!’ and I went, giving as much as I had to give. That feeling I had was incredible.

Author, The Medicine of the Tuba.

Eli Newberger, The Medicine of the Tuba, Doctors Afield, Yale University Press, 1999: “As I play, I do not focus on what I am doing with the tuba to produce the sounds; it all happens spontaneously, and quickly. (If you stopped me and asked me at any moment, though, I could tell you exactly what I was doing and exactly what note each member of the band was playing.) In the middle of making music, I’m thinking colors, textures, and feelings, not notes and chords.”

pianolance, Best Tuba Player on the Planet, TubeNet, March 3, 2007: “what is your choice… for the greatest all around tuba player ever, alive or dead? Arnold Jacobs? Bill Bell? Roger Bobo? Rex Conner? Tommy Johnson? Cast your vote.”

iiipopes, Famous Quotes About Tubas, TubeNet, February 15, 2006: “In high school, prepping for a marching contest my freshman year, we had before school field practices. It was so cold one morning the four of us souzy players all had our valves freeze. Wait – there’s a catch – mine froze open. The next guy’s froze with 1 down. The next guy…you get the picture. So we all just shrugged our shoulders at each other, paid careful attention and played the notes we could, which, as it turned out, was just about everything.”

David Kirk of the Houston Symphony has said that it’s easier to become a United States Senator than a tuba player in a serious orchestra.

I would completely agree with that. There’s only one tuba per orchestra, and my predecessor, Chester Schmitz was here for thirty-four years. So you either have to wait for them to retire or get hit by a bus.

Hell, we could play some of it right now. Let’s just pick up our horns and play something. I’ll just play you a little blues line, Mike, in the key of C, and we’ll honk something for you.

The most modern instrument in a modern symphony orchestra is the tuba. It was the last instrument to be added to what’s considered the standard complement of an orchestra.

TubeNet is my new favorite site. I’m completely sucked in. Yes, there are thousands of web forums out there where people get together to toast their shared obsessions, but you... 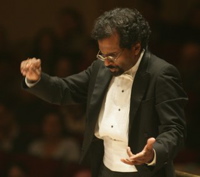 George Mathew‘s extraordinary musical project unfolds anew tonight at Carnegie Hall. On the bill is the longest symphony in the standard repertoire, Mahler’s Third, with a couple of hundred star...