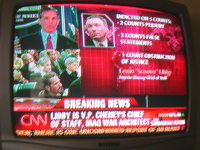 We’ve done several shows on Plamegate, and each time we have to ask, “So wait, remind me, what happened when?” If you’d like to refresh your own memory, check out Frog-Marching: Miller, Cooper, Rove or Getting Judith Miller or Rome to Yellowcake to Grand Jury: How Did We Get Here?.

The current installment in this le Carr&#233-esque mystery is Scooter Libby’s perjury trial. On Thursday the prosecution wrapped up its case; the defense begins on Monday.

The twists of the trial rest on minutuae: of notes scrawled on margins of documents; of who leaked what information to whom, when; of why stories don’t match up and who’s covering for whom. The big question, though, isn’t about Libby. It’s about what his trial will churn up on the White House’s role in discrediting criticisms of its WMD claims. In other words, it’s about whether the White House lied to galvanize the country to go to war in Iraq.

Libby’s trial does raise questions about Dick Cheney’s part in undermining Joe Wilson. It’s also rubbing the mainstream media’s face in its failures on this story four years ago — and we’re curious to ask whether, as a result, investigative reporters will dog whatever clues emerge from the trial.

Author, The Genius of Impeachment: The Founders’ Cure for Royalism

Author, Dick: The Man Who Is President

Scott Shame and Jim Rutenberg, Cheney Testimony in Libby Trial Would Carry High Risk, New York Times, February 12, 2007: “But the first 10 days of testimony have already exposed some of the long-hidden workings of Mr. Cheney’s extraordinary vice presidency, revealing how deeply Mr. Cheney himself was engaged during 2003 in managing public relations as the administration’s case for war came under attack.”

David Johnston, A Historic Moment if Cheney Testifies Live, as Expected, New York Times, February 12, 2007: “If he testifies as expected, Dick Cheney would be the first sitting vice president, at least in modern times, to appear as a witness in a criminal trial. And if he testifies in court, he may also be the first to give live testimony in defense of a subordinate’s actions on his behalf, legal historians said.”

Adam Liptak, Cheney’s To-Do Lists, Then and Now, New York Times, February 11, 2007: “RETURNING to the White House after the Memorial Day weekend in 1975, the young aide Dick Cheney found himself handling a First Amendment showdown. The New York Times had published an article by Seymour M. Hersh about an espionage program, and the White House chief of staff, Donald H. Rumsfeld, was demanding action. Out came the yellow legal pad, and in his distinctively neat, deliberate hand, Mr. Cheney laid out the “problem,” “goals” while addressing it, and “options.” These last included “Start FBI investigation — with or w/o public announcement. As targets include NYT, Sy Hersh, potential gov’t sources.””

Frank Rich, Why Dick Cheney Cracked Up, New York Times, February 4, 2007: “The White House was terrified about being found guilty of a far greater crime than outing a C.I.A. officer: lying to the nation to hype its case for war . . . Though Mr. Libby’s lawyers are now arguing that their client was a sacrificial lamb thrown to the feds to shield Mr. Rove, Mr. Libby actually was – and still is – a stooge for the vice president.” (Behind the NYT paywall, but viewable on TruthOut for free.)

R. Jeffrey Smith and Carol D. Leonnig, Vice President’s Shadow Hangs Over Trial, The Washington Post, February 4, 2007: “Vice President Cheney’s press officer, Cathie Martin, approached his chief of staff, I. Lewis ‘Scooter’ Libby, on Air Force Two on July 12, 2003, to ask how she should respond to journalists’ questions about Joseph C. Wilson IV. Libby looked over one of the reporters’ questions and told Martin: ‘Well, let me go talk to the boss and I’ll be back.'”

Robert Kuttner, See Dick Run (the Country), The American Prospect, August 28, 2006: “Cheney is in a class by himself. The administration’s grand strategy and its implementation are the work of Cheney — sometimes Cheney and Defense Secretary Donald Rumsfeld, sometimes Cheney and political director Karl Rove.”

Jane Mayer, The Hidden Power, The New Yorker, July 3, 2006: “Most Americans, even those who follow politics closely, have probably never heard of [Cheney’s aide] Addington. But current and former Administration officials say that he has played a central role in shaping the Administration’s legal strategy for the war on terror.”

We’ve seen that the administration, or at least key players in the administration, including the Vice President, were obsessed with protecting their position. They did not want anyone to know that there was a serious discussion about whether they were right to argue for going to war in Iraq in the way that they did.

Why isn’t somebody in the mainstream media in Washington saying, “They’re doing it again?'” We’re seeing the phenomenon, the whole pattern, all over.

Not putting the defendant on the witness stand is not a show of confidence. That is an act of legal desperation. That is normally done when the defense attorneys feel their client is so guilty that if he gets on the witness stand, he will not only get convicted of this, but will face other charges by the time he leaves the stand. Look, defense lawyers put guilty clients on the stand all the time and let them perjure themselves and say “I didn’t do it,” because it’s usually a necessary component of a criminal trial in order to walk someone out of the building. When you can’t put the defendant on the stand, you have such a weak, and for most lawyers impossible, case, that you’re facing something pretty hopeless. Now, once you’ve faced the case in those kinds of terms, from Libby’s perspective you say, “OK, what is the friendliest possible way for me to conduct my defense so that I can go to that White House and get a pardon when the dust clears on my guilty verdict.”

When you’re reading something in a national publication like Time or Newsweek, you expect that this information has been vetted, not only by the writer, but then by their editors. And yet we find out that Matthew Cooper consistently writes mistyped letters in his notes, and he can’t recall what exactly happened. And he doesn’t even include the key quote against Libby when he sends in his initial report to Time. We learn that Judith Miller keeps her notes in shopping bags under her desk, and that she writes in parentheses and question marks, and then when you ask her about it later . . . How should we trust what we read in the press?

Let’s not forget that reporters, like senators, are part of the zeitgeist of the moment. They are operating within a kind of a national mood and an atmosphere about the question under discussion. If we go back to 2003, we were still very much in the post-9/11 period. I think that there was a sense that the administration could pull off this war. They were part of it, but so was everybody in the country . . . I don’t think they had the killer instinct on this partly because of this atmosphere.