A good hour. I was really interested in Robert Jay Lifton’s idea of the communal construction of disaster narratives, and it was important to have Daveed Gartenstein-Ross there to tell us — call him a fear-mongerer if you will — that there are people out there who want to kill us.

But the one question we didn’t get to — the one question that bugged me for the rest of the evening — is this: are we actually afraid or are we just faking it? The people on the street in Cambridge, MA, who were more afraid of U.S. policy than terrorist plots, might not be representative of the country as a whole. Nor, perhaps, was our cultural studies professor from North Carolina (never been afraid in her life) or our anti-terrorism expert in New York (nothing keeps him up at night). But speaking personally, I’m a whole lot more afraid of dying from a car crash than a dirty bomb. And a quick poll around the office bore this out (in short: more bike helmets than Cipro). All of which begs that question. I mean, is anyone losing sleep about terrorists? Or rather: are enough people scared enough that we can actually call ourselves a fearful nation? And if not, what’s to make of all the talk about fear if it’s nothing but talk? Echoing nother’s point, perhaps we’re just playing at fear, testing it out for fun, like a long-term societal ride on a roller coaster — one that doesn’t let you bring your own toothpaste? 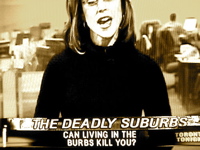 In this hour we’ll examine the post 9/11 culture of fear. How it is perpetuated, how we react to it and what in the world we should really be bracing...

Intern Sam lost his radio virginity producing What is Englishness? last night. Unfortunately, the main guest he’d booked called two hours before the show and told us he was deliriously...