I ran into Studio One as soon as last night’s show ended, because I couldn’t wait to try my hand at (or, rather, near) this instrument we’d heard for an hour. I grew up playing violin and later viola, and like to think that I have some musical facility, so I thought that I could muddle my way through something. I actually was trying to decide what my first piece would be — something lyrical, of course, but not too serious. Maybe it would be “Somewhere Over the Rainbow,” or “Maria?”

The Gods have given serious smackdowns for lesser hubris. 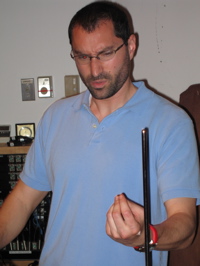 The theremin is so impossible to play that the entire preceding hour — which had been weird and otherworldly enough — suddenly made absolutely no sense to me. It seems to respond not just to breathing, as Pamelia mentioned, but to thinking about breathing. It reacts wildly not just to a fraction of a millimeter of a pinkie wiggle, but also to your wrist. And your elbow. And your side. I managed a warble, a screech, and a blurp. But no “Maria.”

What’s most interesting, in retrospect, is that Pamelia (and other thereminists as well, although she seems to be in her own class) has a kind of mastery I’ve never even considered. I’m aware of super-tasters (like the ones Malcom Gladwell introduced us to in those labs in New Jersey), and super-smellers (those perfume makers who can detect 20 top and bottom notes). I’ve seen pianists with a sense of touch and pressure that left me speechless. I’ve read about interrogators who can spot micro-facial expressions that barely register on a camera. But I had never thought about a master of abstract space, of invisible fields, of a hand moving with no frame of reference through thin air.

Although, hmm: maybe this is just dance at the nearly nano level?

From the Cutting Room: Montana Senate

The Reel Deal [Alex Gaylon / Flickr] Yesterday we recorded an interview with Karen, who a blogs at Karbon Kountry Moos. She’s a rancher living in a sparsely populated...

24 MB MP3 America’s coverage of Cuba usually focuses on one of three things: whether or not the US should lift its decades long embargo, something involving the Buena Vista Social...