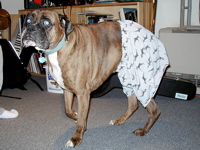 Is Mark Foley suddenly political dynamite for the family values party or a case of a liberal, cynical media exploiting America’s obsession with sex and its fear and dread and embarrassment of it too?

But is it just naughty emails or a coverup of biblical proportions? A tipping point after two weeks of solid bad news in George Bush’s White House or hypocrisy that only the vast left-wing blogosphere could spew?

The beltway is crazed over what the Republican leadership knew and when they knew it. We’ve been wondering today, though, why sex hijacks the public discourse in America; why our media waterboards us with it and why it’s so excessive and puritanical and dysfunctional all at once.

Author, The Evil BB Chow and Other Stories,

My Life in Heavy Metal, and Candyfreak, and co-author of Which Brings Me To You .

Author, Portents of the Real: A Primer for Post-9/11 America

Professor and Founding Director, Center for the Study of Popular Television, Syracuse University

Extra Credit Reading
Allen Bartlett, A Conservative’s negative opinion of the 109th Congress, Powder Blue Report, October 3, 2006: “This incident also shows the sheer hypocrisy of the GOP or anyone else moralizing to the electorate. Isn’t it funny how some of the biggest bible thumpers are always the ones prone to get caught in the act doing things they are always speaking out against.”

Today’s Lies, A rational, intelligent discussion Of Mark Foley the politician rather than simply as a Republican, Today’s Lies, October 2, 2006: “This has also been hard to write about because Mark Foley does not fit the stereotype the Democratic Party wants him to: the fire-breathing, right-wing theocrat with a wife and 7 kids, who is really a closeted homosexual. He is a bit more complicated than that.”

Tom Scharbach, A victim of sexual abuse responds to the Drudge Report’s take on Foley, PurpleScarf, October 2 2006: “I wasn’t going to comment on the Foley story — I’m a survivor of sexual abuse, and not unbiased — but Matt Drudge put me over the edge.”

John Dickerson, Democrats can go too far with the Foley scandal, Slate.com, October 2 2006: “Foley was a Republican, and the Republican leadership knew something, so out with the lot of them.”

Michelle Malkin, Malkin slams the Republican leadership over Foley coverup, Michelle Malkin, October 3 2006: “What I am hearing from some conservatives inclined to pooh-pooh Foley’s behavior and carry on about Barney Frank instead does not sit well with me. You can’t possibly read Foley’s communications with minors that have been disclosed…and dismiss them as merely “naughty e-mails.”

Click to Listen to the Show (24 MB MP3) Hello Capitol [dospaz / Flickr] Ohio’s 15th congressional district presents one of the top opportunities for Democrats this year. The Columbus-area electorate is...

Heather Wilson has several things going for her (incumbency, a strong military/National Lab presence here, much better get out the vote for Republicans historically, etc.) that has up to the...