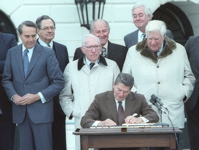 Our Presidential Power show never materialized, despite a lot of exhortations from our loyal readership, but the issue has never gone away. Far from it. The latest outcry about a possible chink in the checks and balances system focuses on the practice of presidential “signing statements,” official addenda in which the president explains his interpretation of the bill he’s signing into law — or just outlines the parts of the law he’s chosen not to follow.

Bush isn’t the first president to tack on these legally confusing Post-It Notes, but he’s certainly been the most prolific, quietly signing more than 750 since he took office, as the Boston Globe‘s Charlie Savage reported on Sunday. That’s more than three times as many as his father, and more than five times as many as Clinton — and in opposition to a much wider range of statutes.

So, in response to Jon, we’re reviving a presidential power show, and asking: is this a wild Executive tilt in the balance of power or a constitutionally proper signal of Executive intent?

Click to Listen to the Show (24 MB MP3) Here’s Stephen J. Hadley, assistant to the president for national security affairs, this weekend on CBS’s “Face the Nation”: The president has been...

Integration and Extremism: Muslims in Europe