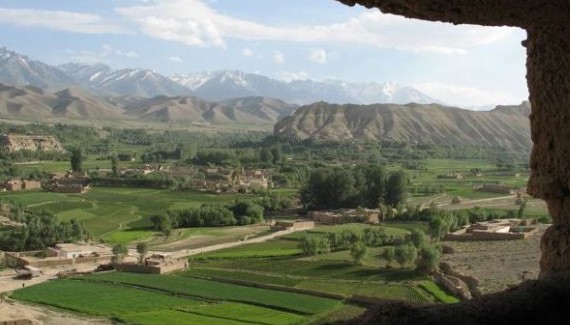 Qais Akbar Omar: What We Owe the Afghans

Qais Akbar Omar: What We Owe the Afghans Qais Akbar Omar’s view of the Bamyan plain in Central Afghanistan, from one of the caves behind the ancient Buddha statutes. The author and his family took refuge here for a couple of months in 1993 When he went back and took this photo in 2006, the Buddhas were gone. Qais Akbar Omar might persuade you that “poetry is the essence of Afghanistan,” and that story telling is still the soul of the place. He is giving us a young Afghan writer’s impressions of boyhood in Heaven and a civil war in Hell. In the most exciting days of his life, we’re sharing his idyllic view of the Bamyan valley from the eyes of the giant Buddha statues, before the Taliban blew them up. Then come the breakdown years of holy gangsterism and grotesque cruelty. Alongside young Qais, we’re staring down mad dogs who mean to tear him apart — and a man, believe it or not, making ready to bite him to death.

Qais Akbar Omar was studying business at Brandeis University when we started our conversations a year ago. Since then he has entered Leslie Epstein’s graduate program in novel writing at Boston University. Rug making is the link, as it also underlies the “strategic patience” he is recommending to Americans in the world. His grandfather was a rug trader, but young Qais was the first in his line to learn the rug-maker’s knots. When he started writing his personal history, he started noticing “how words are like knots in a carpet. One connects to the next until several make a thought, the way knots make a pattern.” He speaks now of this first book, A Fort of Nine Towers, as “the most complex and difficult carpet I have ever woven.” Of the post-American Afghanistan emerging, he says: “I know it will take a long time. I am a carpet weaver. I know how, slowly, one knot follows another until a pattern appears.”

In all his adventures and in his cathartic recounting of horrific fear, pain and loss, Qais has absorbed and adopted the stoic voice of his beloved grandfather. Old man and teenager are held together at one point in a ditch filled with dead bodies, under a sign promising “you will not walk out alive.” His grandfather tells Qais to write an answer in charcoal on their cell wall: “Death only breaks the cage, but it does not hurt the bird.”

There’s a challenge in this tempered memoir of a people, a culture and a U.S. warzone we barely got to know: “I have long carried this load of griefs in the cage of my heart,” Qais writes. “Now I have given them to you. I hope you are strong enough to hold them.” For American readers the particular challenge, as I take it, is to look inward at the presumption and folly of our faraway military interventions. In this case: our appropriation of Afghanistan as a key battlefield of the Cold War.

Of the Americans’ long half-trillion-dollar engagement, direct and covert, for 30 years (his own lifetime) Qais Akbar Omar writes scathingly: “We are waiting to see what they will build, besides their military bases.” What Americans have not helped Afghans build is sewers, a electrical grid or clean-water systems. What we have not learned is the double lesson dealt to Alexander the Great in the 4th Century B.C.: that the Pushtun tribesmen of the Central Asian mountains are not to be dominated by outsiders; and that they have their own venerable shuras and the loya jirga, or grand council, for managing their many differences.

“One thing Afghans talk about,” Omar is saying, “is that Europeans and Americans owe Afghanistan this much — to bring peace to this country for defeating the Soviets and ending the Cold War.”

The way it works in Afghanistan is that with the local shura or jirga you invite the head of the town or the heads of each tribe and you sit together in a big mosque. Whether it takes one day or one month you talk about things and you come to solutions, and go on to the next thing… Militarily you fight with them for centuries. And they fight back. Afghanistan is 75 percent mountain, and every Afghan who fights back believes he is a child of the mountain. How do you fight the mountain and its children? It just doesn’t work that way. The best way is the tradition of the jirga or shura. Where is the problem? Where is the solution everyone benefits from? And then let’s go for that.

Yes, the U.S. government is spending more money in Iraq than they’re spending here in Afghanistan, and yes there are more troops in Iraq than here. Many people were starting...