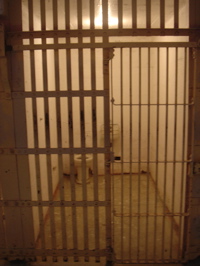 We did two shows about the lives of black men in America – one that looked at the numbers and one that looked at the stories behind the stats. For a lot of the men we talked to, prison was a clear part of the well-documented constellation of broken homes, poor education, underemployment, and drugs. For these men, prison is not just a constant – increasingly, it seems like a lynchpin.

But common doesn’t make it natural. Crime rates have fallen in America, even as prison numbers have continued to rise. The astronomical growth in the number of prisons and the number of Americans incarcerated inside them (200,000 in 1970 to nearly 2 million today) is historically grounded in an increasingly punitive criminal justice system, mandatory minimum sentencing for drug offenses, a political climate that mandates politicians be tough (or at least talk tough) on crime, and a rapidly de-industrialized economy that left the poor and undereducated with few good options for stable, well-paid employment.

Because prison rates are racially disproportionate, everything else gets thrown out of whack – especially the numbers about gainful employment post-prison, and the ability of the formerly incarcerated to reconnect with their families. And that’s just the beginning. Want to talk about the fact that most formerly incarcerated can’t vote? Or the fact that prisoners are counted not in the census of the places there from (usually urban) but the place where their imprisoned (usually white and rural or suburban)? Or that women who are imprisoned (again, disproportionately minority) routinely lose custody of their children? The list goes on.

It’s overwhelming, but we’re going to try to talk about this in the course of an hour. Where should we start, and where should we end up?

In this morning’s story meeting we decided we felt compelled to focus tonight’s show on the scary possibility that the Bush administration may be planning some sort of pre-emptive attack on Iran. So the prisons show is still on track, but postponed one week to Monday, April 17.

After reading everyone’s comments and doing some pre-interviews, we’ve come up with one possible way to focus the show. avecfrites hit the nail on the head when he wrote:

It’s quite easy to say that locking up an offender removes him or her from the streets and therefore makes the country safer. But this ignores the more subtle effects of locking people up, such as the fact that more kids grow up without intact families and they then are more likely to act antisocially or criminally.

We’d like to talk about how prison impacts the lives of the prisoners, and the lives of the families they leave behind. And how that builds to larger consequences for their neighborhood, city, and the country as a whole.

Author of the forthcoming book, Punishment and Inequality in America

Author of the forthcoming book, Promises I Can Keep: Why Poor Women Put Motherhood before Marriage

Did research in Camden, New Jersey on the impact of prison on the women and children left behind