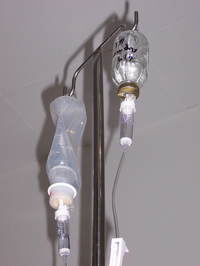 The color line in America’s healthcare system has surfaced repeatedly in our ongoing series on race and class. Several recent government studies have underscored the pervasive inequalities in minorities’ access to care and in their overall health (e.g. the 2002 Institute of Medicine study on unequal treatment and the 2004 National Healthcare Disparities Report). It’s been obvious for decades that wealth level correlates strongly with healthiness and access to care. But even if you account for class differences, there are clear racial disparities. Some examples: blacks are 40% more likely to die of cardiovascular disease than whites; minorities are less likely to undergo bypass surgery or kidney dialysis/transplants; black women with breast cancer have shorter survival rates than white women. So this hour we’ll be trying to understand the enormous number of factors that play into all of this.

One is environment and lifestyle — living, for example, in a polluted inner city where healthy food can be difficult to find even if it were affordable contributes to high rates of asthma, obesity, diabetes, and cardiovascular disease, among other problems. Minorities are also disproportionately represented in prison populations, where infectious disease rates are extremely high. [UPDATE: As “The Angry Heart” — which nother recommended in the comments below — points out: the constant stress of coping with racism and/or living in a dangerous neighborhood can have a big impact on health.]

Then: minorities face barriers in access to healthcare. They are more likely to be uninsured, the hospitals that serve their neighborhoods may be of lower quality, they may not have adequate transportation to reach a hospital, they may not be able to afford time off from jobs to go see a doctor, they may feel intimidated by the system and avoid going to preventative appointments…the list goes on.

And finally: once they’re actually in the healthcare system, minorities may encounter language barriers, a frightening hospital bureaucracy, overt or unconscious racism, unequal rates of referrals to specialists, doctors who aren’t educated to deal with cultural differences that affect beliefs about health or ability to communicate health information…again, the list continues.

So what’s to be done and where do you start? We’re hoping our guests can tease this apart. Among the things we’d like to hear from you: have you encountered racial inequalities in healthcare as a patient? As a doctor?

Director of the Center for Health Disparities Solutions at the Johns Hopkins Bloomberg School of Public Health. Author of Minority Populations and Health: An Introduction to Health Disparities in the U.S.. More on Thomas LaVeist and the book here.

Co-chairs the Disparities Committee at Massachusetts General Hospital (MGH). Senior scientist at the MGH Institute for Health Policy. Was on the Institute of Medicine committee that produced the 2002 “Unequal Treatment” report. Practices internal medicine at MGH. Here’s a full bio.

ER physician and on the faculty at the University of Maryland Medical Center in Baltimore, MD. Also works as a patient educator and advocate. Click here to read more about her.