[This show records at 4:00pm Eastern to accommodate our guests’ schedules.]

America is woven of many strands; I would recognize them and let it so remain. It’s ‘winner take nothing’ that is the great truth of our country or of any country. Life is to be lived, not controlled; and humanity is won by continuing to play in face of certain defeat. Our fate is to become one, and yet many — This is not prophecy, but description. Thus one of the greatest jokes in the world is the spectacle of the whites busy escaping blackness and becoming blacker every day, and the blacks striving toward whiteness, becoming quite dull and gray. None of us seems to know who he is or where he is going. 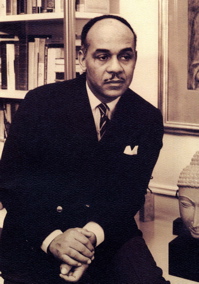 Arnold Rampersad’s prickly, irresistibly absorbing reassessment of Ralph Ellison (1914-1994) — the writer, the man, the vision — reopens some fascinating gaps in the legend of the canonical African-American novelist, plausibly dubbed the Jackie Robinson of American high culture.

For the Open Source conversation, Rampersad implies key questions about us: how does the author of Invisible Man (his lonely masterpiece, which won the National Book Award in 1953, over his hero Hemingway’s The Old Man and the Sea) help us see the complexities of black-and-white America in 2007? What remains of the Ellisonian “tapestry” idea of our country and especially of its culture? This is the vision sustained and extended by Ellison disciples like Albert Murray, Stanley Crouch and Wynton Marsalis, or by Ken Burns‘ PBS series on the blues-and-jazz tradition as the foundation of American classicism.

Might the ghost of Ralph Ellison be noting today that the last two US Secretaries of State have been African-American — the incumbent a minister’s daughter in earshot of Birmingham, Alabama’s infamous church bombing in 1963; might he remark on the Kansan-Kenyan ancestry of the Democratic darling, Barack Obama; might he observe the irreversible advance of gumbo flavors in sports, idiomatic language, dance, humor, fashion, music and all the rest… and shout: “I told you so!”

Or might the mordant voice in Ellison himself be leading the hindsight argument that Invisible Man turned out to be the swan song of folk blues culture? … that the folk-art-to-fine-art alchemy of Louis Armstrong and Duke Ellington hasn’t worked that way for ages… that hip-hop represents a triumphant commodification of subversive messages coming not from authentic artists or considered experience but strictly from commercial media?

Might Ellison’s blacker-than-he critics still be peppering him, and all the high-tone culture buffs, with an angry listen-here? Stop confusing cultural eminence with political power, Ralph Ellison! Come back to Harlem from the Century Club in midtown Manhattan. Come back from (of all things) the board of Colonial Williamsburg! Pay less attention to art for art’s sake, and more to the real suffering, exclusion, poverty and despair among brothers and sisters you were happy to rise above!

The glaringest Ellisonian irony in Rampersad’s story is that Ellison, the fount of a profoundly enthusiastic, optimistic and inclusive affirmation of American possibility, was also one of the great naysayers of his turbulent times. No to black power. No to Black Arts, as championed by Leroi Jones, who became Amiri Baraka. (Jones’ sociology of black music, Ellison said in a review, “is enough to give even the blues the blues.”) No to black-studies departments on campus. No to anything that smacked even momentarily, even tactically, of black nationalism, much less black separatism.

A surpassingly brilliant writer on jazz — himself a music major at Tuskeegee and almost professional trumpet player — Ellison can be selectively quoted to suggest he became a supreme old fogey who rejected bebop in the ’40s, slashed Charlie Parker and mocked Miles Davis in the ’50s, and virtually despaired of black music’s future after the Beatles and other had pillaged it in the ’60s. It could seem that the grandest, most sophisticated theorist of American inclusion had come to stand for something else. Ellison did not endorse Toni Morrison for membership in the Century Club, and when she was finally inducted, he did not greet her there.

There is a drift toward nastiness in Ellison’s later life. Readers of Rampersad’s book have noted their suspicions that the deeper he got into Ellison’s story, the less he liked the man. The critic and biographer Phyllis Rose says why in the new American Scholar:

His impulse to exclude is the most unattractive thing about Ellison, and it is at the heart of Rampersad’s understanding of his character. He had a way of describing people whose values and talents were different from his own as ‘mediocre’ and seeing himself as objectively better. He had earned what he had gotten by effort and merit. Others wanted to be given what they didn’t deserve. The beneficiary of incredible luck and historical political momentum, he acted as though he was uniquely qualified for all the honors showered upon him. His scorn for ordinary black culture and black people may have served him well as a younger man, energizing his achievements, but it didn’t serve him well in later life, making him harsh and judgmental, leading him to exhibit an unbecoming absence of sympathy, and perhaps crippling his own imagination.

Phyllis Rose, The Impulse to Exclude, in The American Scholar, Spring 2007.

To my taste there’s nothing quite as compelling in the personal history here (including the agonized, unanswered questions about 40 years of wheel-spinning on the second novel he never completed) as the dense beauty and truth of what Ellison wrote. Do not the stubborn, sometimes cranky but entirely trustworthy wit, integrity and style of Ralph Ellison still ring true? On, for example, the voice of the immortal blues singer Jimmy Rushing, with whom Ellison grew up in Oklahoma City.

Steel-bright in its upper range and, at its best, silky smooth, it was possessed of a purity somehow impervious to both the stress of singing above a twelve-piece band and the urgency of Rushing’s own blazing fervor. On dance nights, when you stood on the rise of the school grounds two blocks to the east, you could hear it jetting from the dance hall like a blue flame in the dark, now skimming the froth of reeds and rhythm as it called some woman’s anguished name — or demanded in a high, thin, passionately lyrical line, ‘Baaaaay-bay, Bay-aaaay-bay! Tell me what’s the matter now!’ — above the shouting of the swinging band. Nor was there need for the by now famous signature line: ‘If anybody asks you who sang this song / Tell ’em / it was little Jimmy Rushing / he’s been here and gone,’ for every one on Oklahoma City’s ‘East Side’ knew that sweet, high-floating sound…

For Jimmy Rushing was not simply a local entertainer; he expressed a value, an attitude about the world for which our lives afforded no other definition. We had a Negro church and a segregated school, a few lodges and fraternal organizations, and beyond these there was all the great white world. We were pushed off to what seemed to be the least desirable side of the city (but which some years later was found to contain one of the state’s richest pools of oil), and our system of justice was based upon Texas law; yet there was an optimism within the Negro community and a sense of possibility which, despite our awareness of limitation (dramatized so brutally in Tulsa riot of 1921), transcended all of this, and it was this rock-bottom sense of reality, coupled with our sense of the possibility of rising above it, which sounded in Rushing’s voice.

Isn’t there yet much resonance and reality, much comfort and guidance in Ellison’s view of American life?

Ralph Ellison, Ellison’s 1953 National Book Award Acceptance Speech: “If I were asked in all seriousness just what I considered to be the chief significance of Invisible Man as a fiction, I would reply: Its experimental attitude and its attempt to return to the mood of personal moral responsibility for democracy which typified the best of our nineteenth-century fiction.”

The Masticator, Jeff Wall and Ralph Ellison: Invisible Man, The Masticator, March 16, 2007: “Is staging elaborate photographs of scenes from great literature an art historical mis-step equivalent to filming and refilming great literature? Is rehashing stories that exist only in our minds a mere cheap trick that gets our approval only because we’re proud of ourselves for recognizing something we’ve read about?”

Saul Bellow, Man Underground, originally published in Commentary, June, 1952: “I think that in reading the Horizon excerpt I may have underestimated Mr. Ellison’s ambition and power for the following very good reason, that one is accustomed to expect excellent novels about boys, but a modern novel about men is exceedingly rare. For this enormously complex and difficult American experience of ours, very few people are willing to make themselves morally and intellectually responsible. Consequently, maturity is hard to find.”

Adam Kirsch, The Visible Ellison, The New York Sun, April 18, 2007: ” No charge is brought more often in Mr. Rampersad’s book than Ellison’s repeated failure to do anything to help younger black writers, even those who greatly admired him. Mr. Rampersad seems to have spoken to everyone who ever tried, and failed, to get Ellison to give them a blurb or a letter of recommendation.”

Jon Trott, Lower (for Ralph Ellison) – Black Writers, part 4, Blue Christian on a Red Background, February 9, 2007: “Exactly why Ellison flips my tumblers is hard to explain. But I think it has a lot to do with his being able to write a “racial” novel that nonetheless takes us past race into the heart of ourselves.”

Tom, A Life Made Visible: Questions for Arnold Rampersad, Review This Online, April 26, 2007: “I’m not sure if I like Ellison more after reading his life story–he was a difficult, flawed character in many ways–but seeing his single book placed in the center of a life filled with ambition and struggle makes it all the more impressive an achievement.”

Lindsay, Chaos and Imagination, we are such stuff as dreams are made on, April 11, 2007: “While the narrator at the end of the book might not know what his next step will be, Ellison’s next step is writing this novel… It seems to me that Ellison is trying to be a bridge between chaos and imagination, using one to understand the other.”

thomas, in a comment to Open Source, April 30, 2007: “If David Halberstam’s legacy is that we’ll always need journalists thrusting images of truth into our consciousness in the face of falsehood, Ellison’s is that we’ll always need novelists “thrusting forth its images of hope, human fraternity, and individual self-realization” and offering us alternative realities to our otherwise sad and brutal lot.”

VeritasRox, in a comment to Open Source, April 30, 2007: “The Invisible Man struggled similarly, as he failed to assume an identity compatible with Northern, Southern, Black, White, Socialist, or Capitalist expectations. As with his protagonist, it’s hard to label Ellision unless we’re willing to buck these easy identities and, without necessarily offering a satisfying explanation, crawl down into the sewers with him.”

The barbershop atmosphere continued after we recorded our Ralph Ellison show last night. Chris followed Arnold Rampersad to the Harvard Book Store for a reading and Q &...