[Thanks to Luigino Valentin for suggesting this show]

And this was only one notch, among many, in his beltway legacy. By the mid 70’s Nader was an American icon: famous for saving millions of lives, famous as a public interest lawyer for having such a long, legislative record.

Imagine if you got into a car and the airbags said ‘Ralph Nader,’ or if the seatbelts said ‘Nader,’ or if you look up at the clean air and it says ‘Nader.’ If people could see that on a day-to-day basis, they would understand the effect that this guy has had on their daily lives.

But in 2000, when Nader tossed his hat into the presidentail ring, nearly all that he had accomplished during his 40-year-career was forgotten. Having been marked as the man who handed George W. Bush the key to the White House, Nader was no longer America’s knight in shining armor — he came to solely represent the nadir of our political process. From President Jimmy Carter to Michael Moore, practically every liberal in America sent Ralph packing for the dog house.

Eric Alterman of The Nation, An Unreasonable Man, 2005

We jumped at the chance to have Ralph Nader, one the most influential and polarizing figures in America, on Open Source.

For those of you who want full Nader immersion, he has a new book out, The Seventeen Traditions, which is a personal history of the values and idealism that he was suffused with as a young boy growing up in Winsted, Connecticut. There is also an excellent documentary on DVD, An Unreasonable Man, which offers a non-partisan look at Nader’s life and enduring career.

What is your take on Nader? Are you more in sync with Nader’s Raiders or Nader haters? As the 2008 election heats up do you miss his presence on the campaign trail? Or his absence in the presidential debates? Do you see Nader as a selfless activist or as an opportunistic megalomaniac? What questions do you have for a man who has so firmly made his mark on our country?

We had a long conversation this morning about this show. Although we will touch on the 2000 election we’ve decided that it will be more interesting to focus on Ralph Nader the man. Ralph Nader, the local boy from small-city Winsted, Connecticut, the small-d Jeffersonian democrat, and the child of purposeful immigrant parents who told him that “character” was “destiny.” We’ll also be reminded that Ralph Nader is a man with a sense of humor.

Ralph Nader, Let the People Make the Laws, CommonDreams.org, May 8, 2007: “Don’t expect Mike Gravel to show up in the money-raising sweepstakes. For he really believes in a government of, by and for the People. This proposal is not exactly a magnet for Fat cat money. No candidate for President from the two major parties has ever demonstrated such a detailed position regarding the sovereign power of People to amend the Constitution and make laws.”

Cheney and the BYU 25, This Divided State, May 1, 2007: “Could anyone have imagined that the major commencement protest at a University graduation thus far occurred April 26 at Brigham Young University (BYU)? Probably not.”

Seth Gitell, Ralph Nader Pays Tribute To David Halberstam, Dispatches from Seth Gitell, June 15, 2007: “I’ve always been struck by the coincidence that Ralph Nader attended elementary school with David Halberstam in Winsted, Connecticut. They also were at Harvard together. These two individuals, one the initiator of public advocacy non-profits, the other a journalist of titanic proportions, provided more scrutiny over American institutions during the latter half of the 20th Century than whole armies of others.”

aaraujo, Dems don’t let Dems vote Green Party, Daily Kos, June 18, 2007: “My fear is that a potential 2008 Democratic ticket will bring back the Green Party Nader voters. I see the turmoil on these message boards and I see the very real fear that liberals will once again spoil the 2008 race.”

David Kucinskas, A Gift From Ralph Nader?, Daily Northwestern, May 24, 2007: “Did Nader have an ulterior motive for giving me a book that obviously has an agenda? Probably, but that in and of itself didn’t appear that threatening to me. I can deal with people telling me what to believe politically.”

Ralph Nader’s “The Seventeen Traditions”, Cover to Cover, May 28, 2007: “As a Canadian, it was interesting learn about his early connection with cousins living in Ontario. This book made me think about my own family’s traditions. It could be a great conversation starter for any family interested in exploring its roots and shared values.”

Dana Milbank, Unsolicited Advice From the Far Left, The Washington Post, June 27, 2004: “The advice continues to flow to Moore from candidate Nader. ‘I’ve been at him for years, saying “you’ve got to lose weight,”‘ Nader said in the phone interview. ‘Now, he’s doubled. Private exhortations aren’t working. It’s extremely serious. He’s over 300 pounds. He’s like a giant beach ball.'”

Brett McKay, Frugal Tips From Ralph Nader, The Frugal Law Student, May 26, 2007: “You might not agree with his politics, but you have to agree that Ralph Nader is one frugal guy. While Nader has assets in the millions, he still lives like he’s a starving law student. Here are a few tips we can learn from Mr. Nader’s life.” 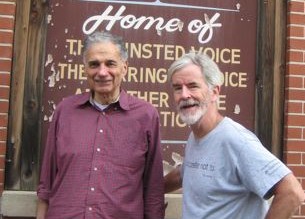 Mary McGrath photo Ralph Nader on Main Street can still see the flatbed trucks hauling textile machinery out of his hometown in the 1950s, his high school years. The work...