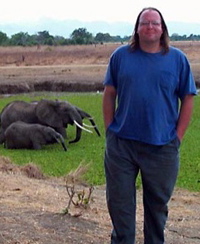 Ethan Zuckerman is up there with Yo-Yo Ma among my heroic models of global citizenship. His brainchild, Global Voices Online, is my model of journalism transforming itself.

Global Voices Online (GVO) is an edited aggregation of blogs in roughly 200 countries. It’s a brilliant early stab at the notion of the world reporting on itself. I think of it as Ethan’s answer to the famous prayer of the great Scot, Robert Burns (1759 – 1796): “Oh wad some power the giftie gie us / To see oursel’s as others see us!” … and, in the meantime, to see Chinese, Colombians, Nigerians and others in something like the variety of ways they see themselves.

The conversation here is a master class with Ethan and the new managing editor of GVO, Solana Larsen, from our Monday-night new-media seminar with a score of Brown students.

The old cartoonish model of parachute journalism was a reporter from New York or London, with a crisis mentality and a short list of questions. The new model is hundreds, or thousands, of homegrown bloggers piecing together many perspectives — counting on a hidden hand of links to sort out differences and shape a “lede” on the story. Kenya and China present the most striking examples of how the new model is pushing back on the old one.

Solana Larsen: In the post-election violence in Kenya in January, we had a team of Kenyans who read the Kenyan blogosphere. Local media was shut down. No live reporing was allowed. Where did you go for information? Who was taking pictures? Who was taking cellphones and cameras out to where the violence was happening. Bloggers. So by collecting many different voices of bloggers we provided a feed, with round-the-clock updates on blogs, linking to the contributions people were making in the country, and working together with mainstream media to connect to bloggers they could talk to, with email addresses and phone numbers…

Ethan Zuckerman: What happened in Kenya was very interesting. The read on Kenya from global media at first was: Oh, here’s another Rwanda, right?. Everybody saw the violence in and said: Oh, were’ gonna see this nation go up like a torch. And the bloggers came back and said: no, no, no, you don’t get it. This is political violence. This is not ethnic and racial violence. This was a thrown election and people are furious about it, but we also see evidence all over the place of people in communities looking for ways to make ethnic and racial peace. Concerned Kenyan writers put on a concerted campaign to contradict certain narratives: that all African violence is tribal; that Africa is always on the edge of falling to pieces; that Kenya was coming apart. And at the same time they wanted to talk about a genuine electoral injustice. At ushahidi.com, for example, fires on the map of Kenya were the icons locating violence, and doves for locating peace efforts. Kenyans told their own story…

The best-read story on Global Voices Online last year was about an otherwise invisible scam in China. It makes Ethan’s point that the next step for the citizen journalism is rewriting the mainstream agenda:

Ethan Zuckerman: If you are a New York Times reporter and you’re looking for news in China you are probaby looking for economic stories: how is the US slowdown affecting the Chinese economy? You’re always looking for democracy and repression stories, because there’s an endless appetite for it. And you’re probably looking for and Olympic stories: will they be reay? What will we see? How will it change them?

The story you probably would have missed unless you were reading the blogs was about ant farming. This is a story that didn’t get a ton of attention in the US, but should have.

It’s very difficult to invest in China today. If you’re an average Chinese citizen, the interest you get from your bank isn’t worth very much. It’s difficult to buy shares on the open market.

So what you have is basically the Albanian economy immediately after the fall of the Berlin wall. You have people investing in Ponzi schemes, and pyramid schemes. And one of the most popular ones has been ant-farming. Companies come to you and give you a cardboard box filled with of ants. You pay $100, $200, maybe $500 for the ant farm and the company agrees to buy ants from you as the ants grow up.

Before you conclude this is completely insane, we should mention that ants are used in a great deal of traditional Chinese medicine. There are these companies that look like formal, well run establishments that claim that they’re going to make herbal viagra out of ants.

What ended up happening was, in Shenyang, a rust-belt village, people were defrauded out of, literally, more than $100-million through these ant farm scams. In many cases people lost their life savings.

We started covering this story not because we’d decided to follow the Chinese economy, but because the Chinese blogosphere exploded. Lots of Chinese bloggers knew a friend or a family member who had lost money in ant-farming and wanted to tell the story. The Chinese government predictably reacted by shutting down a lot of these sites. In lots of cases we had the only videotapes of the evidence.

We got blocked for the first time in China. We’d reported on the arrest and detention of our own Chinese editor, and we started a human-rights campaign to get him released. That didn’t get us blocked. Ant farms were a different story, because people were taking to the streets

In the end the Chinese government stepped in, and offered to compensate people for their money lost. At then they executed the guy that was running the scheme. Consumer protection isn’t always our job, but it’s a really interesting function for telling you what stories to watch. What’s interesting in China is the economics that puts people out on the street. We wouldn’t have known that had we not been listening to Chinese citizens writing in Chinese and letting it filter up from the blogs and set our news agenda.