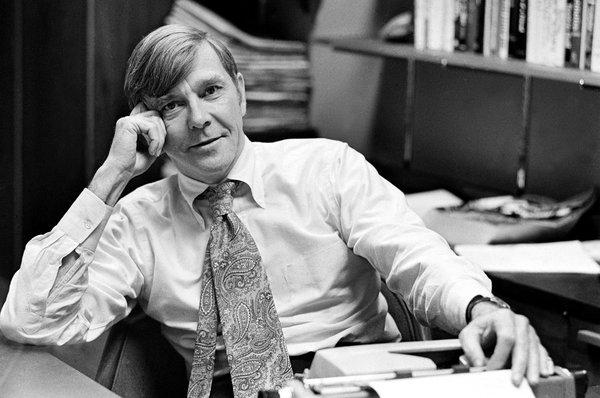 We loved that man, on top of worshipping his cool, insightful, hilarious Times column. Newspaper guys didn’t say this sort of thing, but Russ Baker made your heart flutter. Lunch or even a few words with the great Baker in the office felt like prom night. He was so handsome, in his Jimmy Stewart way; such a kind, wise, good man. At the top of his profession, he savored James Reston’s line that a man’s career was not to be confused with his life. “Your job is a means to your private life,” as Reston once put it to me. Russ Baker’s life was exemplary. His first reader and editor was always Mimi, his stunning wife and soulmate. His daughter and two sons were and are characters, blessed and funny originals. Russ’s friendship was a treasure, often just a few words. He would pause at my desk as I sweated and groaned on deadline. “Chris,” he would say, “just tell them what happened.” Thank you, Russ, then and now. My wife Cindy came to adore the man exactly as I did, and we amended our vows to allow that if she ran away with Russell Baker, I would understand. I happen to know that the press box gods in those decades — David Halberstam, Anthony Lewis, Neil Sheehan, Scotty Reston himself, Anthony Lukas, Tom Wicker, Ned Kenworthy, Hendrik Hertzberg and, yes, I. F. Stone — felt crushes like mine and Cindy’s: pangs of blushing elevation, excitement, something like redemption around this guy. Reston knew that the key stroke in assembling his immortal Times Washington Bureau of the 50s and 60s was hiring the lean country kid from the Baltimore Sun to cover Lyndon Johnson’s Senate. Tony Lewis in his Cambridge kitchen had a poster-size blow up of Russ Baker’s takeoff on Craig Claiborne’s $4000 expense account meal, on Times duty in Paris. Baker’s home-cooked version, “a Lucullan repast for one,” was beans in bacon grease, eaten out of the pan, with a shot of room-temperature gin. “I had a Gilbeys, 1975, which was superb,” he noted.

Years later, Russell Baker credited me with nominating him to succeed Alistair Cooke as host of Masterpiece Theater on PBS. I had suggested him to WGBH’s Rebecca Eaton, though in fact I’d also proposed John Updike, and Claire Bloom as well, thinking before they split that Philip Roth might write her copy. Uncannily, Rebecca reported that Baker and Updike had both responded at first in nearly the same words, to the effect: “I don’t think my mother would approve my doing television.” Baker got the nod, in any event, apologizing at first, in Baker style, because “my hands and elbows instinctively start flailing and clawing the air as if an alarming case of St. Vitus Dance is taking place right in front of the camera.” But then he thanked me for “one of the best jobs a bookish old guy could have.” It was the least I could do, dear Russ, for the man who embodied our newspaper dream.
–Chris Lydon