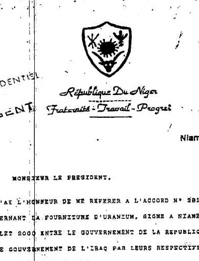 The forged intelligence documents, available in their entirety at Cryptome [Cryptome]

We saw, in the last week, the re-emergence of the Rome connection: La Repubblica wrote a lengthy report two days ago on the provenance of the Niger forgeries, that is, the documents that originally led the UK and the US to believe that Iraq was seeking to purchase yellowcake uranium.

Details? Perhaps the best thing the White House had going for it as it made the case for war was the sheer complexity of both the available evidence and the way government works. So as we all wait to discover — tomorrow? — what Special Prosecutor Patrick Fitzgerald has been planning, we’re taking a look at what this means and how we got here. This is not a story about leaks; a leak, from any party, is just an expression of intent. If the offices of the President and the Vice President did indeed leak information, why did they do it?

The answers are leading us — as Fitzgerald’s investigation is leading him — to Rome. A special prosecutor’s inquiry into a leak has become a John le Carre novel: reporters have uncovered a freelance intelligence salesman named Rocco. It’s complicated and it’s all still alleged and pieces of it — if true — are truly ugly.

What it comes down to is this: the Bush administration built its case for war chiefly on the idea of a nuclear threat. If it turns out that any of this evidence was creatively assembled — and the media is converging on Rome right now to figure it out — the political fallout will be vastly more brutal than the simple indictment of a member of the White House staff.

Annenberg Public Policy Center of the University of Pennsylvania, Bush’s “16 Words” on Iraq & Uranium: He May Have Been Wrong But He Wasn’t Lying

La Repubblica on the provenance of the Niger forgeries, translation parts I, II and III (thanks Andy Thompson)

With Warren Strobel, winner of the Raymond Clapper Memorial Award from the Washington Press Club for coverage of the Bush administration’s use of intelligence before the war

(Jon Garfunkel wanted Landay to come on the show so badly that he wrote us a poem.)