Really, the holy land for potatoes, the epitome, the apotheosis of spudliness is an island that’s been fascinating me for some time, Tristan da Cunha, which is the most remote human inhabitation on the planet, in the South [Atlantic]. Three hundred people live there, all the descendants of shipwreck victims. On this island, what they mostly eat is potatoes, crayfish and lobster. They grow the potatoes in a place called ‘Patches’, in Penguin guano, which apparently grows the best potatoes…

I am waiting to take the long slow boat from Johannesburg that goes to Tristan… I would get to the beach, I would walk the three miles to Patches, I know where they are, and I would pick up a potato. That would be my moment. Even if I expire, upon eating that first bite of potato, with Mr. Glass [the chief of the island], with his ever-sympathetic gaze, and Mrs. Glass, who has a way I understand with curry puffs… that would be it.

So we checked out this fantasy-island for ourselves. The good news is that it exists [really, here it is on the map, and in global perspective], and many across the world have been enchanted by its siren call. Tristan da Cunha has become the mystical treasure-island get-away fantasy not only for Jim, but for travelers, Google earth explorers, bloggers, and perhaps even a few Open Source staffers. 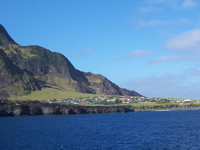 Edinburgh, the coastal capital of Tristan 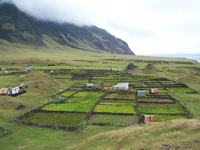 rickmoore, world explorer and blogger, wrote this of his five-week stay there:

Since there is no guest house or hotel, I was welcomed into the home of Julia, Katlin, and Karl Hagan. The original house was built shortly after the settlement was established in 1811. Julia, in addition to running the hardware store, looked after all the meals. Katlin (2 years old) supervised everything.

The island is a healthy environment. It gets 3116mm rain/year… The sea shimmers and roars constantly … there always seems to be a football game on TV, as the island has the BFBS (British Forces TV)…

The 250 people living there form a big extended family. The project that I was working with brougnt 24 hour electrical power to the town, but many islanders wondered if they really needed it. 10 years ago there were 2 cars, now [there are] over 100; there is even a mini-rush hour as people leave for their cottages 4 km away at the [potato] “Patches” on Friday at 2 pm. They say that there is no divorce, no unemployment, and large projects (such as installing a new roof) call for a barn raising style of party.”

And with these two words, ‘rush hour’, the whole fantasy dream, which we’d been blissfully entertaining since Jim rhapsodized on the theme of The World’s Most Remote Island, came crashing down. 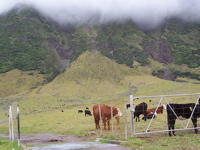 Cows, one of the five or six species of wildlife on Tristan [bonzo30 / Flickr]

Who knows how cars floated to this little outpost of nature and pastoral bliss in the South Atlantic. Maybe the indigenous albatross carried them (and who knows about gasoline). Regardless, we’re sure the clever and ever-gentle Tristanians will treat them not as an addiction, but with respect and moderation, as a necessity and not a luxury. With soccer games taking place in the main town green, surely there’ll never be the need for an SUV. 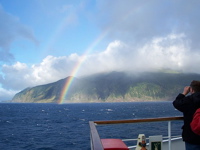 Keep up with all the breaking Tristanian news here, at the island’s first, only, and most authoritive website, brought to you by satellite.

And when you decide to go, there’s a boat which embarks for the island eight times each year. After the six-day trip from Cape Town or Johannesburg, it’s a £15 passport fee, £20 per night for a home-stay with a villager (including laundry) and only £10 for an island guide.

Jim Leff, after bringing us ricotta pastries from Modern Pastry in the North End, taking a chowhound sniff at the pad thai provided for WGBH’s pledge-week volunteers and, yes, anchoring...