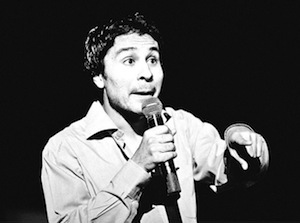 KARACHI — Dying is easy, as the old comedian could have said about Karachi today. It’s making jokes about it that’s hard. This is Saad Haroon‘s calling as a Pakistani version of Jon Stewart, on television and in the comedy clubs that survive, almost thrive, despite everything. We’re getting an introduction to professional humor here on a day when one of the big newspaper headlines says: “Deadly drone attacks kill 61.” And we’re getting a lesson in a strange legacy of Pervez Musharraf, the Army strongman here through the George W. Bush years in America.

A radical expansion of FM radio and commercial television channels in the last decade has filled the air with often raucous political chat, analysis and satire. There’s even a Pakistani version of “Dame Edna” — a cross-dressing TV host, “Begum Nawazish Ali,” who built a career impersonating Benazir Bhutto, then on teasing politicians and the religious right. And still there are limits, as Mohammed Hanif was explaining. Call it the Musharraf Double Standard: Pakistanis should feel entitled to say almost anything, and to change almost nothing in a veiled military dictatorship that fronts for an openly feudal social hierarchy. And beware the line where words approach incitement to action.

What’s acceptable, then, as public humor as Saad Haroon reads the rule? Terrorists, believe it or not. Young women in burkas. President Zardari’s lust for “money, money, money.” And before him, General / President Musharraf’s lust for “power, power, power.” In the stage bits he shared with us, I liked Saad Haroon’s voice-over for a Bollywood love story, “Pipeline of Passion,” between Musharraf of Pakistan and President Sonia Gandhi of India — the man in uniform and the bereaved widow, on the phone late at night: “Mushy, you take Kashmir…” “No, Sonia, you take Kashmir…” I also love his version of a Pakistani guy talking with a mouthful of paan leaves.