What Makes a City Great?

What Makes a City Great?

This is a city where a lot of of the problems that have plagued America, and continue to- problems of race, problems of dying industries- just aren’t here. We don’t have to think about it anymore, and we’re surprised anybody still is.

Note: This post was originally titled “Sourceless in Seattle.” 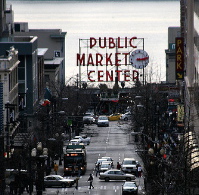 We’re heading to Seattle next week.

The ostensible reason is this public radio new media conference, but we’re thinking about the trip as a great excuse to do a live show at KUOW, to meet some of our Seattle listeners, to drink some stronger coffee and to eat some sweeter salmon.

So: what are the burning issues up there in that northwest corner? Who do we need to meet? Who should we have on the air? And what should we talk about?

Help us out, O.S. Pacific Northwest. We know about you, faithful Nikos. Who else is lurking out there?

Also, we’re thinking about an Open Source meet-up. Any ideas for a good, central location?

We asked, and you answered.

There were a lot of suggestions, some intriguing (like jmartenstein’s “Seattle Chill) and some just too big — too important, really — for a single hour of radio (like Didi in Seattle’s “how stupid it is to have the car fog lights turned on when it’s not foggy out”), but the most passionate responses coalesced around the slippery notion of urban greatness. As Scarequotes put it:

A great place to start that encompasses a lot of the issues in Seattle for the last 10 years or so: what does it mean to be a world-class city? Seattle really wants to be one. Are we? Why not? 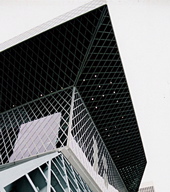 Answer: is it a library designed by a world-class architect? [uberculture / Flickr]

In the office this past week we’ve been trying out city variations on the old joke that if you have to ask, you can’t afford it. Something like: if you’re wondering if your city (be it Seattle, or Boston, or wherever) has arrived at world-class status… it hasn’t. (It’s not like New York or Paris losing sleep over this question. They’re too busy not sleeping.)

But beyond this “are we there yet” question are some more interesting ones:

What makes a city great in the first place? What are the ingredients, the psychology, the topography? What makes a city livable? Are they the same thing? What about sustainable? What about green? And what does it mean when an entire city is obsessed with these questions?

If we can tackle all of these in under an hour, we’ll move directly to fog lights.

Author (of many things, but most recently), My Holy War: Dispatches from the Home Front

Nikos, babu and peggysue will meet at the Rosario Strait (see the whole map). For the last week I have been reading details in small print of the search...

When Tolerance is Just Tolerance

Signs of Moroccan-Dutch good will in Amsterdam [bicyclemark / Flickr] bicyclemark is our man in the Netherlands. We know him as the active community member who has been around for as...