The window. The diligent manuscript

Someone is building God in the twilight.

A man engenders God. He is a Jew

Of sad eyes and citrine skin.

Time carries him as the river carries

A leaf in the downstream water.

No matter. The enchanted one insists

And shapes God with delicate geometry.

Since his illness, since his birth,

He goes on constructing God with the word.

The mighties love was granted him

Love that does not expect to be loved.

from Spinoza and other Heretics: The Marrano of Reason by Yirmiyahu Yovel, Princeton, 1989 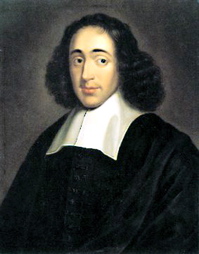 Not only lives but lurks in the near background of many of our conversations — on God and science, for instance, and political freedom, toleration, dissent, the pursuit of happiness and the good life. The outcast sage of 17th Century Amsterdam is a favorite of many of our favorites — including P. G. Wodehouse, Einstein, the brain scientist Antonio Damasio and the omni-critic Harold Bloom.

Wodehouse’s “mentally negligible” Bertie Wooster was forever interrupting his brilliant valet Jeeves with lines like: “I know you like to read Spinoza in a leafy glade… but I wonder if you could spare me a moment of your valuable time?”

Proust’s favorite metaphysician Henri Bergson (1859 – 1941) thought “every philosopher has two philosophies, his own and Spinoza’s.”

Bertrand Russell called Spinoza “the noblest and most lovable of the great philosophers.” Bloom concurs to the extent that Spinoza “was surely one of the most exemplary human beings ever to have lived,” though Bloom also finds “an icy sublimity” in Spinoza. “He was greatly cold and coldly great.” It’s part of the problem, surely, that Bloom has been haunted for more than half a century, he says, by Spinoza’s admonition that “It is necessary that we learn to love God without ever expecting that he will love us in return.”

At the core of one big conundrum is Spinoza’s formulation (Propositions 14 and 15 in his Ethics) that: “Except God no substance can be granted or conceived,” and “Whatever is, is in God, and nothing can exist or be conceived without God.” To 19th Century Romantics Spinoza seemed a “God-intoxicated man,” fathering a religion of nature. In his time and ours, the hyper-rationalist philosopher who gave the intellect at work a virtually sacramental standing has also been deemed a pantheist and an atheist for “disappearing” God into His natural creation. Hence the most famous of the Einstein anecdotes, well told by the Harvard historian Gerald Holton:

In 1929, Boston’s Cardinal O’Connell branded Einstein’s theory of relativity as “befogged speculation producing universal doubt about God and His Creation,” and as implying “the ghastly apparition of atheism.” In alarm, New York’s Rabbi Herbert S. Goldstein asked Einstein by telegram: “Do you believe in God? Stop. Answer paid 50 words.” In his response, for which Einstein needed but twenty-five (German) words, he stated his beliefs succinctly: “I believe in Spinoza’s God, Who reveals Himself in the lawful harmony of the world, not in a God Who concerns Himself with the fate and the doings of mankind.” The rabbi cited this as evidence that Einstein was not an atheist, and further declared that “Einstein’s theory, if carried to its logical conclusion, would bring to mankind a scientific formula for monotheism.” Einstein wisely remained silent on that point.

In Looking for Spinoza: Joy, Sorrow and the Feeling Brain Antonio Damasio, mapping the neural pathways of human emotion, rediscovered Spinoza’s virtually Euclidian geometry of human feelings and reclaimed Spinoza as a modern bridge over the age-old Mind/Body gap.

Damasio walked the alleys and canals of Amsterdam in search of Spinoza’s spirit, and brought him back alive for many of us amateurs. “Spinoza’s God was everywhere, could not be spoken to, did not respond if prayed to, was very much in every particle of the universe, without beginning and without end. Buried and unburied, Jewish and not, Portuguese but not really, Dutch but not quite, Spinoza belonged nowhere and everywhere.”

Rebecca Goldstein’s new book Betraying Spinoza: The Renegade Jew Who Gave Us Modernity establishes not least that Spinoza belongs at the center of Open Sourcery. Goldstein’s search here is for the Jewish foundations under the thinking of a man most famously expelled from the Amsterdam Synagogue, who saw no divinity in the Hebrew or Christian Bibles, who foreswore the Jewish love of Jewish history, and who minimized the value of “identity” of any kind — national, tribal, religious or individual. Does his thinking represent, in effect, a flight, Goldstein asks, from “the awful dilemmas of Jewish identity”?

And if this is so, then Spinoza is something of a Jewish thinker after all. He is, paradoxically, Jewish at the core, a core that necessitated, for him, the denial of such a thing as a Jewish core. For what can be more characteristic of a Jewish thinker than to use the Jewish experience as a conduit to universality?

The story of Spinoza the Jew — descended from Spanish “marranos” or forced converts to Catholicism, who reclaimed their faith and practice in the Dutch Republic — has been much discussed in reviews and the blogosphere. It is but one way into a multi-dimensionally alluring man who who said his project in life had been to “discover and acquire the faculty of enjoying throughout eternity continual supreme happiness.” Where shall we begin with this wonderfully heretical believer who wrote:

He who rightly knows that all things follow from the necessity of the divine nature, and happen according to the eternal laws and rules of Nature, will surely find nothing worthy of hate, mockery, or disdain, or anyone whom he will pity. Instead he will strive, as far as human virtue allows, to act well, as they say, and rejoice.

Spinoza in his posthumous Ethics.

Professor of Neuroscience and Psychology, University of Southern California

Timothy Garton Ash, Islam in Europe, New York Review of Books, October 5, 2006: “One question that preoccupies Buruma in Murder in Amsterdam, a characteristically vivid and astute combination of essay and reportage, is: Whatever happened to the tolerant, civilized country that I remember from my childhood? (He left Holland in 1975, at the age of twenty-three.) What’s become of the land of Spinoza and Johan Huizinga, who claimed in an essay of 1934 that if the Dutch ever became extremist, theirs would be a moderate extremism?”

Shlomo Leib, Speaking of Spinoza, The Sentimental Heretic, January 30, 2007: “As a result of this unintended language barrier, we have some who believe that Spinoza was a mystic and others, like myself, find Spinoza to be a refreshing and definitive expression of materialism and determinism, much like philosophical Taoism was to eastern thought, but with the added features of rationalism and circular reasoning.”

Hugo, From Sudoku to Spinoza: The Hedonistic Side of Reasoning, AlphaPsi, January 30, 2007: “Spinoza is probably the epitome of philosophers who tried to built their entire system on pure reason. One of the reasons for this might be the strength of the hedonistic value reasoning had for him”

Carl Schroeder, Kalalau’s Korner, Spinoza, Galludet, and I, October 23, 2006: “I am a Spinoza guy, and I am also a Gallaudetian. Yes, I do crave such systems, and I act as if I know them. But they are impossible. Both Spinoza and Gallaudet are fascinating as the philosophical and educational, respectively, claims of the past, I also realized that, although such words of theirs may inspire me to no end, their work to encompass human knowledge in their categories can never be correct.”

I was taught that Spinoza’s grand metaphysical schemes — trying to deduce the nature of reality through pure reason alone, eschewing science and empircal observation — that this was delusion, that this was metaphysics in the worst sense of the word.

There is this recognition of the reality of our biology . . . This man is, to a certain degree, what I would like to call a “protobiologist.” At a time when biology was in its infancy, he was able to think like a biologist.

He always expressed dismay when he was described as an atheist.

The very important concept of conatus — that this striving, this endeavor for each organism to maintain itself and to flourish in the world — there’s a dark side to that, also, that Spinoza emphasizes. One of the things that Spinoza is most concerned with is false beliefs . . . His burning concern was religious intolerance, and how the religion of reason that he was proposing could defang relgious intolerance. To the extent that we’re rational, we’re all going to agree, we’re all going to partake. It’s the same universe, the same eternal universe that we’ll be contemplating. That’s what our minds will be constituted of . . . to some extent we’ll all have exactly the same mind.

This respect for reasoning and truth in oneself, together with the benefits of the democratic society in which you are inserted, are in fact paths for salvation in Spinoza. In other words there is a very sort of complex level of salvation that will come when you are really in that immense contemplation of God in his view. But it really passes through an earlier level that includes contains the democratic state, which protects you, and this enormous respect for reason and truth. And you cannot achieve salvation without those.

There are many creatures behind this man, which correspond to his actually rather short life . . . and I don’t think we’re doing at all a disservice by enquiring about who he was and where he lived and how he lived.

Click to listen to Chris’s conversation with Rebecca Goldstein (36 minutes, 22 meg mp3) Who knew that the God question is burning bright in our university neighborhood of brain scientists, mathematicians,...

Realize that most people in the street would not even know who Spinoza is/was. In fact I had to ‘wiki’ myself to recall some things I should know as a...