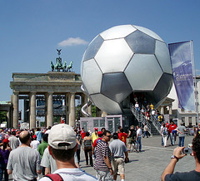 What is this comprehensive “globalization” of sports stars, money, victory all about?

What is the story unfolding in this World Cup summer of empires falling and rising — empires of money and fashion as well as of national pride and prestige?

Is the buzz in the Arab world to be believed: that France’s Zinedine Zidane was taunted into that ugly head-butt by Marco Materazzi’s calling him a “terrorist”?

In another dimension, the World Cup finish looked like Rummy’s worst nightmare: Old Europe going at it in the World Cup Finals, after the strange confrontation of yesteryear’s “axis of evil,” Italy and Germany.

The US eclipse far beyond soccer is a story in itself. At Wimbledon US didn’t get into the quarterfinals among either men or women, an unheard-of rout. Meanwhile, an Italian basketball star was the No. 1 pick in the NBA lottery.

This conversation was triggered by Selena Roberts’ jarring column in the NYTimes last week:

There are exceptions to the free fall — like snowboarders, dude — but just what has eroded the United States’ perch? Globalization. As the geographic sandbox widened and the world shrunk, as images spread across the Internet and political walls collapsed, technology exposed the American athletes’ modern weaknesses

There are deeper implications here about, for example, what’s “cool” or manly in the world…. About how global money and television have redistributed identity and styles on the field: Koranteng suggests the range of angles:

You’d have to talk about the changing nature of the game and how everyone plays in Europe. The Brazilians have made almost one billion dollars selling their players to European teams. The Africans too and these days many of the African teams were were playing a very European

game with only flashes of their style.

You’d have to talk about America’s place in sports. Great Power? Things Fall Apart? Decline and Fall? I don’t know but small things add up. You need some joie de vivre and the sports headlines should be providing comfort.

It was not a good 4th of July… No McEnroe, no Connors, no Agassi, Sampras or Roddick, no Venus, no Serena, no Lindsay Davenport winning at Wimbledon. Instead a Swiss guy and a Spaniard are providing the excitement. And what about that tall Chinese woman who made the quarter finals and gave Clujsters the fits, Li Na? What about feet binding? The Chinese are coming…

Does it seem that the US has been isolated in the summer’s sports news as the fat old banker with the guns, but without the hungry players on the field?

Question: who should be at the table talking about the issue? Off the top of your head! Here’s the pass, take the shot!

Author, Voltaire’s Bastards and The Collapse of Globalism

David L. Smalley, Where have the athletes gone?, from his myspace profile, July 9, 2006

Crunk Raconteur, Well, I Haven’t Been-to-Prague Been to Prague, But I Know That Thing…, Cole Slaw Blog, June 12, 2006

Featured on the show: comments from plnelson, nother (here and here)

and a blog post from Doug Lieb on the Harvard International Review.

24 MB MP3 Chris’s Billboard Africa is what they’re talking about this week: the rock stars, bankers, bleedings hearts and political chiefs of the big-8 lender nations, meeting on a golf course...

When Les Roberts and his team published their Lancet study on Iraq Mortality back in October, they knew it would be controversial. The study estimates that 655,000 Iraqi civilians have...