Over 100,000 voters were possibly affected by [Secretary of State J. Kenneth Blackwell]’s ‘Paperweight Directive’… Approximately 93,000 spoiled ballots occurred in which there was either no presidential vote recorded or multiple presidential votes recorded, and therefor ignored… the NAACP estimates that at least 10,000 voters were disenfranchised… 174,000 people were unable to vote because of the long lines in the minority communities and the urban areas… at least 102,000 voters were disenfranchised by avoidable registration errors… and finally 66,000 had ballots invalidated by faulty machines… Total: a possible 357,000 votes or more… 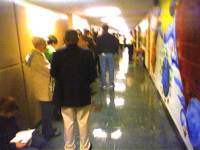 A two-hour wait to vote in Columbus. [Bryce Glass / Flickr]

Consensus seems to be that the 2004 presidential election, especially in the key swing state Ohio, was rife with problems and “irregularities” – endless polling lines in select areas, wildly inaccurate exit polls, shifty processing of voter registration cards etc. But do irregularities add up to fraud? Do problems in our piecemeal, locally-based presidential voting system add up to a stolen election?

A new Rolling Stone piece by Robert F. Kennedy Jr. goes over what we think we know about the last election and alleges as much. Drawing upon new reporting, interviews with high level pollsters and existing memos such as The Conyers Report, Kennedy doesn’t pull his punches.

After carefully examining the evidence, I’ve become convinced that the president’s party mounted a massive, coordinated campaign to subvert the will of the people in 2004. Across the country, Republican election officials and party stalwarts employed a wide range of illegal and unethical tactics to fix the election.

We’re going to talk about this story and its implications. Did Republicans really steal the presidential election in 2004? Or do the irregularities that have been well-documented amount only to faulty organization and some crossed wires?

Is the real conversation about the need for a national voting system, voting reform, and greater national oversight? Is the real story about the lack of consistent media attention to this story (i.e., is a lack of mainstream attention to these accusations analogous to the media’s initial disinterest in the Downing Street Memo?)

We’d especially like to hear from all of you Ohioans. Did you vote in the 2004 elections? Did you experience anything when you registered or went to vote that led you to doubt the validity of the Ohio result? What did you hear from family and friends or in the local press? Is this a story that Ohioans are still talking about or feel strongly about? With the governor’s race already upon us, are we already too late?

Thanks to hurley and Potter for sending this suggestion our way.

Author, Fooled Again: How the Right Stole the 2004 Election & Why They’ll Steal the Next One Too (Unless We Stop Them)

We’ve collated the articles we’ve been reading and the ones you’ve suggested on the comment thread. Here’s a start:

…and Kennedy responds to Manjoo:

Click to Listen to the Show (24 MB MP3) [djwudi / Flickr] Last night we dissected the 2004 Ohio presidential election (what went wrong and why), and tonight we’ll use that same...