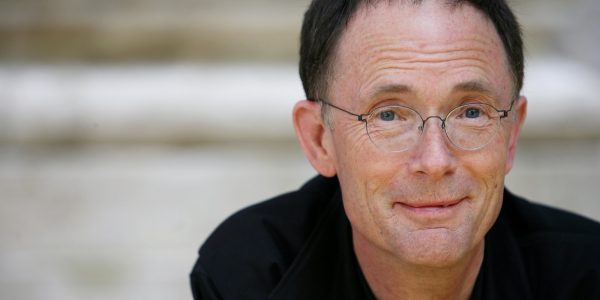 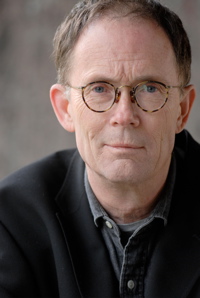 William Gibson, Mr. Cyberspace, dropped into the house yesterday morning for coffee and an hour’s gab. He seems light-hearted and handsome for a hard-core geek-intellectual; friendly and digressive for a cult celebrity on a book tour.

We talk here about:

First, the disappearance of the virtual, of cyberspace itself, because it’s not “there” anymore, viewed from “here.” It’s everywhere, and we’re inside it most of the time now.

In 1981 there was very little cyberspace around. Everything else was ‘the world.’ In 2007 the ratio has reversed. Most things that are happening are simultaneously happening to some extent in cyberspace. And relatively few things are happening outside it. The amount of time we spend without connectivity is getting scarce…

For me the best and most profound experience of seeing a technology change something was being in London on a series of trips when the cellphone hit. One trip was the old London. You were in that solitary grid of London that Ezra Pounds’ little haiku about “petals on a wet black bough” describes perfectly. You’d just see faces along the tube platform. People didn’t chat with one another or with strangers. Next trip, they all had cellphones. The solitude of the transit through London vanished instantly. And it became in that moment a different city, and the previous city needs an artist to recapture. We can’t remember how it was before.

Click to listen to Part I of our William Gibson conversation (10.7 MB MP3)

And carry on, please, with Part II.

Spook Country is William Gibson’s first comic novel, an acidly satirical broadside against the “war on terror.” Set in the political present (2006, in fact; Tower Records is still in business), it’s a thriller about a geo-strategic “prank,” to disrupt or at least embarrass the Pentagon’s cash offensive in Iraq, the real-life inundation of Baghdad in 2003 with pallet-loads of millions of $100 bills.

The “chase” that threads the story turns on rival gangsters and gamesmen — “non-state actors,” in the current parlance, but mostly of the US persuasion — all trying to track a single land-and-sea shipping container. Is it loaded with weapons of mass destruction? Or museum treasures looted from Baghdad? Why is this Flying Dutchman container being driven now to Vancouver? And who’s really behind the several networks of agents hoping to manage its next move?

At all events, it’s the political edge of Spook Country that marks Gibson’s graduation not just from science fiction but also from the cyberpunk genre he mastered and famously linked with episodes of The X-Files, movies like Johnny Mnemonic and Bono’s music.

And it was the political apercus in the book that I was interested in chasing down in conversation. Like this one from the character Milgrim, an intelligence agent who emerges from the haze of an Ativan tranquilizer addiction now and then to speak, it seems, for the author of Spook Country:

“Are you really so scared of terrorists that you’ll dismantle the structures that made America what it is?” Milgrim heard himself ask this with a sense of deep wonder…

“If you are, you let the terrorist win. Because that is exactly, specifically, his goal, his own goal: to frighten you into surrendering the rule of law. That’s why they call him ‘terrorist.’ He uses terrifying threats to induce you to degrade your own society…

In other words, building a world view or a foreign policy around the experience of 9/11 is something like building a family budget around the chance of winning the Irish Sweepstakes. And then there is the sly observation by one of several ex-rockers in a cult band called The Curfew:

“Inchmale thought that America had developed Stockholm syndrome toward its own government, post 9/11…” The Stockholm — or “Patty Hearst” syndrome — being “the fondness and loyalty one could supposedly come to feel for even the most brutal captor.”

I am feeling dazzled and a little dazed by my sudden immersion in Gibson — by my first careful complete reading of a whole Gibson novel, and now by a morning’s easy exposure to the man himself. He is the rarest real thing: an imaginative fictionist for our own strange time. Of course lots of people have been saying that for years. I am a little chagrined to be coming so late to the party, and all the more grateful, too.

Second, William Gibson spoke about the incisive, expatriate politics behind Spook Country. During the Blitz in London, at the back of every British Post Office there were enormous scarlet posters, with...

And Third, we spoke about “ubiquitous media” and Bill Gibson’s own “mediated” evolution from hippie genius and oft-transparent blogger in the direction of, shall we say “commodified” author. Will...