Surveillance in a Digital Age

Surveillance in a Digital Age

In the last few years, most of us — even instinctive technophobes like me — have become practised in the dark art of surveillance. When I’m going to meet a stranger at dinner, I’ll routinely feed her name to Google and LexisNexis to find out who she is and what she’s been up to lately. If you know the person’s street address, you can spy on her house with Google Earth, and inspect the state of her roof and how she keeps her garden. A slight tilt of camera angle, and you’d be able to see into her sock drawer and monitor the bottles in her liquor cabinet.

Jonathan Raban, We Have Mutated Into a Surveillance Society and Must share the Blame The Guardian, May 20, 2006

If Raban — author of the new novel Surveillance — is right, we’re becoming a nation of Nosey Parkers, following the example of a government who listens in our phone calls and reads our email, and a private sector whose surveillance cameras track our comings and goings. And thanks to technology we’ve come a long way since the days when we crouched in the bushes to spy on our neighbors and cupped our ears to the wall to hear what they were up to.

Spying, snooping, and surveilling has long been with us not only in life, but also in art. From Shakespeare’s Pyramus in A Midsummer Night’s Dream to Jimmy Stewart’s housebound photographer in Rear Window, voyeurs have been useful in advancing the action. What has changed is that surveillance is no longer a mere plot device — it has become a subject unto itself.

Little has been made of surveillance films like Cache, The Lives of Others, and Breach. Each is well worth a serious discussion. Angles might include the times that nurture these films’ considerations; their divergent treatments of cultural and political secrecy; and the effects of slow, insidious, and unrelenting surveillance. What are these films telling us?

Patsyb raised an intersting point. Art like surveillance attempts to go beneath the surface to question what is true — we’ll be spending this hour looking at our surveilled society thorugh the artist’s eye. 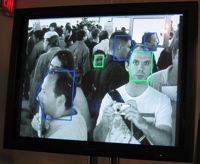 Where have you seen the artists’ take on our watchdog world? What artistic works of the past best captured sureveillence in the 21st century? Can we use the fact that we are being surveilled to our own advantage? Does our ability to surveill one another change our sense of trust? Does a transparent world make us more honest or is it pushing our darker side deeper underground? Have you ever found yourself using the internet to uncover truths about your neighbors and friends?

Author (of many things, but most recently), Surveillance and My Holy War: Dispatches from the Home Front

Jonathan Raban, We have mutated into a surveillance society – and must share the blame, The Guardian, May 20, 2006: “Since September 11, CCTV cameras, magnetometers, BioWatch air-sniffers, razor wire, concrete fortifications and all the rest of the machinery of state security and surveillance have become so much a part of the furniture of life in the US that we barely notice them.”

Andrew Hultkrans, Here’s Looking at You, Kid: Surveillance in the Cinema, Stim, date unknown: “Since its birth, but most explicitly since the 1950s, the cinema has played with surveillance, voyeurism, and the power of the gaze . . .”

Gary T. Marx, Electric Eye in the Sky: Some Reflections on the New Surveillance and Popular Culture, Computers, Surveillance & Privacy, 1996: “Surveillance themes are pervasive in popular culture, although we often do not think of them as such. Consider, for example, the familiar song ‘Santa Claus Is Coming to Town.’ The words to this religious panopticon song are well known — Santa ‘knows when you are sleeping, he knows when you’re awake, he knows if you’ve been bad or good, so be good for goodness sake.'”

Stephen Soldz, Total surveillance state takes giant leap in Britain, Information Clearinghouse, December 30, 2005: “From 2006 Britain will be the first country where every journey by every car will be monitored.”

Erich W. Schienke and Bill Brown, Streets into Stages: an interview with Surveillance Camera Players’ Bill Brown, Surveillance & Society, 2003: “[The SCP Players are] frank truth-sayers who gently and humorously remind us that the rampant growth of public surveillance . . . is something we should be uneasy with and feel nauseated about.”

Stephanie Rosenbloom, I Spy; Doesn’t Everyone?, The New York Times, September 7, 2006: “Digital technology has made uncovering secrets such a painless, antiseptic process that the boundary delineating what is permissible in a relationship appears to be shifting.”

Super Vision, Boston Institute of Contemporary Art, December 10, 2006 – April 19, 2007: “Today’s vision breaks wide open the possibilities for human knowledge and experience, but as the insidious web cam in Albert Oehlen’s painting Dose and the chaotic energy of works by Julie Mehretu and Jeff Koons show us, the effects can also be threatening.” (via rahbuhbuh)