Mark Blyth, the know-it-all professor with the Sean Connery delivery, is back in the pub tonight, and not a moment to soon. When the political economy of energy is screaming red-alert, from Japan melting to Libya’s oilfield civil war, cheerful chatter from a certified political economist can sound like music. Let’s just forget that Mark Blyth, on our last round, told us that austerity would be our nightmare in 2011. And let’s remember it was Mark Blyth’s friend Nassim Nicholas Taleb who cautioned us almost a year ago that we seem to have entered the Age of the Black Swan — a black swan (think: BP oil blowout in the Gulf of Mexico) being an unimaginable event with big consequences and its own impervious mythology of cause and effect. The social service of black swans is to remind us that fragility is a main mark of global systems. In conversation at the Watson Institute, Mark Blyth is generously scooping himself from an article he and Mr. Taleb have co-authored for the magazine Foreign Affairs.

Let’s not get too bent out of shape about it, because complex systems, when they’re tightly coupled, are Black-Swan prone. And if all the volatility in the mix gets packed and shoved under the carpet, so to speak, then they become prone to these explosions. We also have a remarkable capacity to bounce back. Let’s think about what happened with Japan. You had the Trifecta from hell: first you have an earthquake at 9.0, so let’s follow up with a tsunami, and then a nuclear accident. What happens? Global stock markets fall off a cliff. A week later, they’re back. And the Japanese look like they might actually just pull this off. Why? Because they are a very technologically advanced society. Because they’ve got more experience with nuclear energy than anyone else. And because we got lucky. Let’s face facts, it could have been a lot worse. Now what is the lesson that we’re going to take from that? Being humans we’ll probably learn too much, which is to say, “Well, that shows that nuclear power is safe.” No it’s not. We got a sixty year track record. We’ve been lucky so far, but that doesn’t mean we’re not turkeys looking for Thanksgiving once again.

So we become more tightly coupled, there will be more Black Swan events, but our capacity to bounce back is always there… But you don’t want to get in a position whereby what you’re saying is don’t touch anything ever, don’t try anything ever, because it will end up creating some kind of downstream consequence you can’t calculate. Some of those consequences might be good.

Let me give you an example of this. A long time ago, back in the nineteenth century–before they had a fully formed notion of how diseases were transmitted through bacteria and viruses, etc.–there was a theory of disease that said it traveled on the wind, it was smell. And it was the stench that really made you sick. Hence why the Victorians were always running out to get “good air” and go out into the countryside and all that sort of stuff. Now, they were completely wrong. But one of the things that they did, because they were obsessed with smell, was to build sewers. Now that was exactly the right thing to do, had you had the proper theory of disease. So on the wrong theory, they got the smell and literally got the shit off the streets and put it all underground. And in doing so, they made the biggest advance in public health ever, for all the wrong reasons. Sometimes, nonlinearities work out in a really good way. 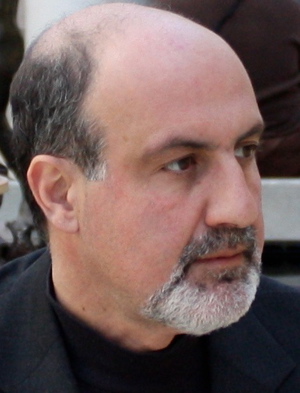 Nassim Nicholas Taleb is one of the great wiseguys or wisemen of the moment. Quite possibly both.

For a world that wants better than the fatuous “perfect storm” account of the economic meltdown — or of BP’s gusher in the Gulf, or of 9.11 for that matter — Taleb has revised and extended his cult classic, The Black Swan. His anomalous “black swan” (since swans are by definition white) has three properties: it’s (1) any one of those unforeseen developments that comes (2) with big consequences and (3) a concocted cause-and-effect after-story. In conversation, Taleb is trying to get us to let go of “causes” and fix on the word “fragility.” He is explaining — sometimes elliptically, aphoristically, through metaphors, jokes and old folk wisdom — why “the economic crisis has barely begun,” why indeed we seem to have entered the Age of the Black Swan.

9. When the big bridge collapses, the “news” interest will be in the last truck that made it over, when the real story should be about the fragility of the bridge.

8. Somewhere in every Black Swan story there’s a turkey. The turkey has a clear understanding of history, and of growth. The nice farmer feeds him every day, and the turkey keeps getting fatter. Then comes Thanksgiving. It’s a Black Swan for the turkey. But not for the butcher.

7. We can say safely that the Black Swan started entering society with agriculture, with the fact that we started settling. Complexification started then… In my tableau of what’s fragile and what’s robust, the nation-state is a fragile entity, whereas city-states are more robust. So the creation of the nation-state created this big unpredictable event, that First War. Even those who saw it coming didn’t see the damage it was about to cause. So the First War probably is the most consequential one, and it came in two volumes…

6. I think that today we are entering a different world of Black Swans because of the Internet.

5. Newspapers make us stupid. They overexplain with “causes” of things that can’t be checked. And because they are driven by the sensational, they misrepresent risk. I prefer the social filter of news, over dinner or lunch. Anything that draws me away from face-to-face contact is harmful to my health.

4. Grandmothers had a rule of thumb after the Great Depression: work and save for a few years before you get into risk… Unpredictability and debt are not friends.

3. On bailouts: My analogy is to the gambler who is now gambling with the trust fund of his unborn great-great-granchildren… Prudence should be the first thing on the agenda of governments, not speculation. Stimulus packages are speculation… We are gambling on a massive recovery. It’s too big a gamble, and besides it’s immoral.

1. No government can fortify something that’s inherently fragile.

Quotes and paraphrases from Nassim Nicholas Taleb with Chris Lydon in Providence, June 2, 2010.