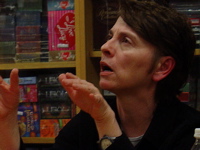 The route to a renaissance of the American fine arts lies through religion… When a society becomes all-consumed in the provincial minutiae of partisan politics, as has happened in the US over the past 20 years, all perspective is lost. Great art can be made out of love for religion, as well as rebellion against it. But a totally secularized society with contempt for religion sinks into materialism and self-absorption and gradually goes slack, without leaving an artistic legacy.

Camille Paglia, “Religion and the Arts in America”, A lecture at Colorado College, February 2007, available on CSPAN

This is for nother, who wrote on the site a year ago that he’d be happy to hear Camille and Chris “discuss a grilled cheese sandwich.”

Yes, conversations with Camille Paglia tend to go everywhere… and we’ll surely get to the Edwardses, the Clintons, the Giulianis and the rise of a compelling new presidential persona in the brownskinned JFK, Barack Obama. I wonder why she writes in her Salon column, resumed after 5 years: “I wish Nancy Pelosi were running;” and what prompted her to tell Mitt Romney (running against Ted Kennedy in 1994) “You’re going to be president.”

Because she’s always had a brilliant ear for media trends, I hope we’ll get to the surging power of YouTube as an instance of the now all-dominant (blogosphere-challenging) visual culture. I hope she’ll have a shot at explaining the voluminous hostility of the Salon comment thread on her comeback pieces… But we’ll begin with Professor Paglia’s observation of the collision between the almost-theocracy of the Bush years and hard-sell neo-atheism from the likes of Sam Harris and Richard Dawkins. What has become of the relaxed and tolerant fascination with each of the world religions as, in Paglia’s line, “a complex symbol system, a metaphysical lens through which we can see the vastness and sublimity of the universe.”

Paglia calls herself an “atheist,” but it always seemed to me the wrong word for a woman who grew up, as I did, with the gaudy statuary, stained-glass piety and Counter-Reformation confidence of the Catholic church in the

American 1950s — and who celebrated Italian-Catholic paganism in her breakthrough book, Sexual Personae.

Paglia is a scholar and culture buff who cannot imagine human life without the religious appetite — or American life without the vital pulse of our religious history. Without the King James Bible, as she writes, there is no Hawthorne or Melville. Without the fire and brimstone of Jonathan Edwards in the 18th Century, there is no Rush Limbaugh today. Without the “image mania” of the Catholic Counter-Reformation, there is no “YouTube” culture stamping out the last inhibitions of Calvinism on our laptop screens. Without the hymns of the “great awakening” in America there is no Elvis and no James Brown. From Julia Ward Howe’s “Battle Hymn of the Republic” to the swan song of the Titanic, “Nearer My God to Thee,” Paglia insists that the genius of “American hymnody should be required study.” And further: African-American gospel music — “passionate and histrionic” — should be recognized as “America’s grand opera.”

So how, she asks, did we come to the sullen and simple-minded alienation of conservative Christians blaming Godless leftists for sex and violence in the popular media; and smug liberals in high dudgeon about the Fundamentalist hostility to abortion and gay marriage?

I hope this conversation will take in how much has changed since yesterday — 1991, in fact — when Camille Paglia burst onto our scene. She’s changed, too — partnered up and adopted a child who’s now in primary school. Ever and always she remains, as I wrote on the site two years ago, My Kinda Talker. What else must we talk about, please?

Extra Credit Reading
Camille Paglia, Cults and Cosmic Consciousness: Religious Vision in the American 1960s, Arion, Winter 2003: “Religion has always been central to American identity: affiliation with or flight from family faith remains a primary term of our self-description.”

Camille Paglia, The Salon Interview: Camille Paglia, Salon, February 7, 2003: “Anyone who thinks symbolically had to be shocked by the explosion of the Columbia shuttle, disintegrating in the air and strewing its parts and human remains over Texas — the president’s home state! So many times in antiquity, the emperors of Persia or other proud empires went to the oracles to ask for advice about going to war. If there was ever a sign for a president and his administration to rethink what they’re doing, this was it. I mean, no sooner had Bush announced that the war was “weeks, not months” away and gone off for a peaceful weekend at Camp David than this catastrophe occurred in the skies over Texas.”

Thomas Hibbs, Praising Paglia, National Review, August 12, 2003: “[Paglia] wants religious texts to be taught as culture rather than as morality, a bifurcation utterly foreign to religious texts. Paglia’s dilemma here is instructive. She faces the obstacles of the modern, self-conscious pagan, someone who cannot believe in the pagan gods in the way an unreflective ancient Roman once did, but is nonetheless attracted to its mythic structure and its rich symbolism.”

galoot, in a comment to Open Source, April 2, 2007: “As a painter I am puzzled by the quotation from Paglia. She calls herself an atheist, but looks to religion to rejuvenate the arts? I’m starting to think that just as you can’t be a little bit pregnant, you can’t be a little bit in favor of religion. Reason v. Unreason, that’s where the battle lines are being drawn – in politics, in art, everywhere.”

pryoung, in a comment to Open Source, April 2, 2007: “Camille Paglia: ‘But a totally secularized society with contempt for religion sinks into materialism and self-absorption and gradually goes slack, without leaving an artistic legacy.’ Well, what about a deeply (often fanatically) religious society that sinks into materialism and self-absorption?”

S. Casey, Camille Paglia on C-SPAN: On the Arts and Religion, The Laughing Bone, March 15, 2007: “In a startling and delightful transformation, she suddenly becomes a hyper-intellectual improvisational stand-up comedian, with all of her natural Martin Scorsese-on-speed vocal mannerisms in full effect.”

Judith, Art and Politics, Part 2, Our World and Welcome to It, March 7, 2007: “Granted, someone can have deeply-held political beliefs and the talent to display them artistically, but anything – art or politics – means little if it doesn’t have something deeper than humanism or materialism as the outcome.”

Camille Paglia discussion group, The Camille Paglia Community: “This is a community dedicated to the study, appreciation, and discussion of camille paglia’s works, career, influences, and characteristic subject matters.”