Man has been a hunter for thousands of years. In the course of countless chases he learned to reconstruct the shapes and movements of his invisible prey from tracks on the ground, broken branches, excrement, tufts of hair, entangled feathers, stagnating odors. He learned to sniff out, record, interpret, and classify such infinitesimal traces as trails of spittle. He learned how to execute complex mental operations with lightning speed, in the depth of a forest or in a prairie with its hidden dangers…

The hunter would have been the first ‘to tell a story’ because he alone was able to read, in the silent, nearly imperceptible tracks left by his prey, a coherent sequence of events…

What may be the oldest act in the intellectual history of the human race [is] the hunter squatting on the ground, studying the tracks of his quarry. 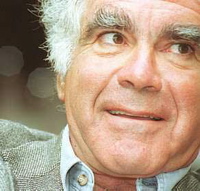 This is an extra-credit conversation — for me a teasing introduction to the father of “micro-history,” Carlo Ginzburg, on a visit to Brown, and one of his gifted disciples, David Kertzer, the Brown provost. They write village-level history about people you never heard of. The micro-historian’s view of the world and their craft is not just bottom-up in the spirit of modern social history, representing the untitled, often unlettered peasantry, the poor and the powerless. They also aim, with the discipline of anthropology and the imagination of novelists and poets, “to see a world in a grain of sand,” in Blake’s line — to recreate a vast social and spiritual panorama from, say, the recovered or newly liberated transcript of a trial.

Natalie Zemon Davis’s The Return of Martin Guerre (1983) is a classic text that became a film, a revelation of married life in 16th Century France. Robert Darnton’s The Great Cat Massacre (1984) unfolded the uprising in a Paris printer’s shop in the 1730s. The inspirational head of the stream was Carlo Ginzburg’s magical The Cheese and the Worms (1976). Told from archives of the Inquisition, it is the tale of a voluble miller, dubbed Menocchio, who was burned at the stake in 1599 for his imaginative (i.e. heretical) speculations about the stuff of the universe (like cheese somehow) and its penetration by angels and spirit (pictured as worms). In Ginzburg’s hands it is the story of early-modern man against authority; of the fusion of Menocchio’s little book learning, at the dawn of printing, with the zeal of the Reformation; and most memorably of a teeming, half-pagan popular religious culture in the rural precincts of Catholic Italy. David Kertzer’s new book this year is Amalia’s Tale, the story from trial transcripts of a wet-nurse from a village near Bologna who contracted syphillis from a farmed-out child of a foundling home. Kertzer’s canvas becomes a chronicle of disease and medicine, law and power, privilege and enterprising resistance, church rules and the meaning of motherhood, and much more.

The triptych of saints over the altar of micro-history, as Carlo Ginzburg recounts, represent Sherlock Holmes, Sigmund Freud and Giovanni Morelli, the 19th Century art historian and sleuth. The trick, as Freud put it, is to divine “secret and concealed things from unconsidered or unnoticed details, from the rubbish heap, as it were, of our observations.” The skill required (Ginzburg’s words again) is “the flexible and rigorous insight of a lover or a horse trader or a card shark.”

What they would teach us is a way of looking at the world right around us. This is, as we say, the short course.