We’re taking two fresh measures here of the United States as military colossus — in two new books from the Watson Institute this spring. Two common points here: you won’t forget these perspectives once you’ve taken in the view; and you won’t see them anytime soon on page one of the New York Times. One is about our military real estate: 900-plus US military bases around the world — many of them toxic, more and more of them under local protest. The other is about the cultural process of war: the technology, media, narrative story line, TV and digital graphics of military power into the 21st Century. The anthropologist Catherine Lutz edited The Bases of Empire: The Global Struggle Against U.S. Military Posts. Political theorist James Der Derian wrote Virtuous War: Mapping the Military-Industrial Media-Entertainment Network.

I asked James Der Derian to take apart the pun in his title about virtue, virtuality, virtuosity…

JDD: I was hoping that “virtuous war” would be a felicitous oxymoron — the tension between the idea of war, which is bloody and dirty, and the whole idea in the virtuous that you can do good through something so blunt as warfare. Part of it comes out of the humanitarian intervention systems that evolved out of earlier administrations; we shouldn’t put this all on the doorstep of the Bush administration. You see it coming together, the virtual and the virtuous, both in doctrine and technology. The idea that what we can do should determine what we should do is part of the notion of “virtuous.” At one time the words “virtual” and “virtuous” were synonymous. They went down separate tracks in the Middle Ages. They always contained this idea of producing an effect at a distance, which technology can do; but it was about producing a good effect. Christ was in some ways a “virtual” tool of God. The notion also in Greek thinking as well of how the gods operated carried the idea of “virtuosity.” So in the United States it becomes almost a “deus ex machina” — to use war — in particular, a high-tech, low-casualty (at least for our side) form of warfare — to solve some of these intractable problems.

CL: What is the connection between the “war on terror” and your “virtuous war”? 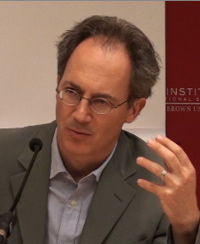 JDD: It speaks to the virtualization of the enemy During the Cold War we had a fairly obvious enemy other. General Powell at one point said we’re being deprived of enemies: all we had left at one point was the North Koreans. In one way when you talk about the War on Terror, it’s to recognize that the old models, the old paradigms of war (particularly the idea of organized violence among and between states) no longer holds. And yet the master narrative continues. So you’re looking for some “other” to plug into this notion of “the enemy.” One reason why the President and others use the term “war on terror,” as absurd as it sounds, is that we didn’t want to recognize the face that you could have 19 terrorists spend about $500-thousand and incur close to $25-billion in immediate destruction, not including the Iraq war that followed, which is going to top out probably around $1-trillion before we get out of there.

CL: Is it possible that Osama Bin Laden and Al-Qaeda mastered virtuous or virtual warfare before we did?

JDD: No, but it you look at what Bin Laden said in a famous interview in 2004, he’s talking about how “we’re going to provoke the superpower, provoke the Crusader, and we’re basically going to beggar them.” He was very savvy about the notion of how to magnify this minuscule group of really pathological heretics within Islam into this colossus that would produce this over-reaction — would call out almost an auto-immune response where our attempt at a cure would be worse than the disease. In that case, Bin Laden was incredibly rational and savvy about how to magnify what was a pretty insignificant force into something that now can play on the same field as the superpower.

Cathy Lutz picked up immediately on the convergence of these two scholars’ perspectives. 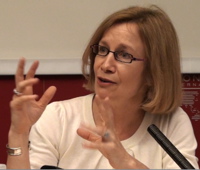 I think that’s exactly the way to look at the American military bases — as a response that has a certain rationality but ends up being a completely overwrought response to the notion of empire — of the desire that the United States has a role, should play and can play a role in controlling events around the world. Hence this global spread and distribution of these bases with that dream behind it of global control, global surveillance, global knowledge. The assumption that there’s a lot of rationality in the system as a whole — we need to rethink that. There’s rationality in parts of it, different forms of rationality, but they form up into what we can see is a pretty fantastical system… It costs over $100-billion in the US military budget. It’s a very significant investment in a certain kind of idea of the world, and the US role in it.