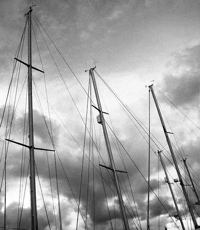 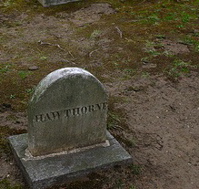 I was amazed–it sounds so innocent and silly–to find that most of American Literature was written in three houses over a period of five years.

The handsomest author and the most adoring wife in the annals of American literature are together again.

You may have heard the news that the remains of Sophia Peabody Hawthorne (whose diamond-etched love lyrics are still readable in the window panes of Ralph Waldo Emerson’s family Manse in Concord, Massachusetts) have finally been returned from England and re-interred alongside the immortal Nathaniel Hawthorne in the Sleepy Hollow cemetery down the road.

But the real story might have been headlined: Sex among the Sages! And it would have dwelt on the feminist mystique and feminine intrigues that thrived among those Unitarian wisemen of Concord: in the network of Margaret Fuller, the Peabody Sisters — Sophia, Elizabeth and Mary, who married Horace Mann, the father of public schooling in America; also Lydian Emerson and a little later Louisa May Alcott. 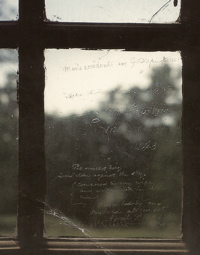 We will pick up the drama with Megan Marshall, whose account of the brilliant Peabody Sisters was nominated last year for a Pulitzer; and with Susan Cheever, whose forthcoming American Bloomsbury brings an intense and sometimes speculative imagination to rounding out the triangles here, and many other mysterious oblique angles. It was well known that Henry David Thoreau had an attachment to the sometimes depressive Lydian Emerson. And that Margaret Fuller had designs on Emerson, with whom she edited a sort of group-blog, The Dial magazine. It’s Susan Cheever’s version that Emerson, the landlord, threw Hawthorne out of The Manse for his for his overzealous interest in Margaret Fuller, who may well have been a model for The Scarlet Letter‘s Hester Prynne. Louisa May Alcott thickens the plot what she thought was her best book: Moods about a woman in love with an earth god like Thoreau and a sky god like Emerson — a woman who dies in a fictional shipwreck, as Margaret Fuller did in a real one.

What we knew about the Transcendentalists — like Emerson, Thoreau, William Ellery Channing, Bronson Alcott and their circle — was that they were men who, before and after Margaret Fuller’s appearance, never met a woman they could really talk with. But the women were talking with and about each other. Are we ready to deal with what they were saying?

Author of the forthcoming American Bloomsbury