Colum McCann wrote the New Yorkiest and, many feel, the best of 9.11 novels, Let the Great World Spin, and won the National Book Award for it. Vertiginous thrills and delights of every kind abound in the poetic density of the book. It feels wondrous, too, that a youngish Irish immigrant wrote it — that he back-dated his tale of New York’s recovery to 1974, and gave it an old-fashioned religious twist of redemption, literally deliverance from evil. Our recording has three parts: first some of Colum McCann’s reading at Wellesley College at the end of March; then his give and take with Colin Channer, the Jamaican “reggae novelist” who teaches at Wellesley; and the rest of the hour with me, drawing Colum McCann out in Easter week 2010, as it happened, on the idea and imagery of resurrection in his work.

Colin Channer: You’re now a U.S. citizen, but are you American?

Colum McCann: That’s a brilliant question! Okay. Yes, I am… If you’d asked me that three years ago, I would not have been able to say yes. Because there’s a huge amount of guilt in losing your citizenship, even though I’m a dual citizen: I’m Irish and an American at the same time, not Irish-American, not hyphenated, no.

I think this is very important to say: I came to this country 25 years ago, took a bicycle across the United States. I found it to be one of the most extraordinarily generous places. Honestly, I’m not playing to the crowd. I went down through Mississippi, Louisiana, through Texas, you know, and everywhere I met this astounding generosity and the desire to tell stories and the desire also to listen to stories.

But now I look at American literature as populated with all these voices, like yourself, right? Like Aleksandar Hemon. Like Chimamanda Ngozi Adichie. So, you’re coming from Jamaica. Sasha is coming from Sarejevo. Chimamanda is coming from Nigeria. I’m coming from Ireland. Yiyun Li is coming from China. Edwidge Danticat is coming from Haiti. And you know what the most amazing thing is? That they can be considered American writers at the same time… They don’t strip you of anything. This seems to me to be like the extraordinary intellectual, emotional generosity of what’s happening despite all the shit that’s occurred over the last ten years of politics in this country. We won’t get into that too much. I do think there’s still something at the core of the experience of coming here and being an immigrant here that’s unlike anywhere on earth. It makes American literature as far as I’m concerned one of the most muscular, elastic and brilliant of anywhere, and I still think it’s at the forefront. 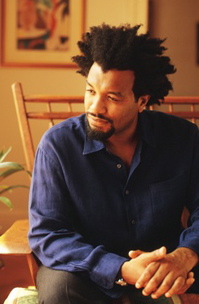 CC: Right. I agree with you. But there’s a certain privilege though, in being an immigrant writer. And I think part of the privilege is that you’re allowed to be serious. Where I think that the tyranny of irony has overtaken so many American writers of our age group, where one feels silly being serious, and so there is the posture of cynicism…

CMcC: There are plenty of exceptions that prove the rule. In terms of American writers that are doing profound things now, I think the Steinbeck of where we are is Dave Eggers. He kicks me in the chest every time. I just think he is so involved and he cares so much. And then William Vollmann and people like that… But there is that sort of middle-aged sort of ironic sort of dark humor sort of thing that just gets up my nostrils. I just think, “Come on, guys!” There’s so much to talk about. It’s very important to take on some of these ideas. You look at the older generation: DeLillo and Doctorow and Banks. They’re doing such great things.

I asked Colum McCann to pull on thread of the extraterrestrial, maybe metaphysical dimensions of Let the Great World Spin.

CL: Touch on the very Christian piece of this novel, starting with John Corrigan whose initials are J.C. He’s living an active, conscious kind of Imitation of Christ there among the hookers of the South Bronx. And of course there’s the tightrope walker [between the Twin Towers] who is enacting, as you say, a kind of anti-crucifixion, a kind of resurrection. It seems to me this is very brave on your part, and it’s a very central part of the beauty of this book.

CMcC: It’s not brave on my part. I think there are other people who are out in the community who are a billion times braver than I am, and they are the monks and the people who are doing the ordinary things. One of my favorite lines is when Corrigan actually says in the book, “Someday the meek might actually want it.” And so that’s what he works towards: this idea that the meek who are supposed to inherit the earth might actually want it and need it. When I was thinking about this whole thing, about having an Irish Catholic character who’s in conflict and everything… I wanted to embrace the expansiveness, the beauty of spirit, the generosity, the decency that actually is embedded in the faith and in the Church. So to be anti-nostalgic, in the same way that you can be anti-naïve, in the same way that you can be anti-simple. So you force yourself into a position of difficulty, because it seems to me that we’ve forgotten… the excellence of difficulty… But there’s something really beautiful in the notion of difficulty.