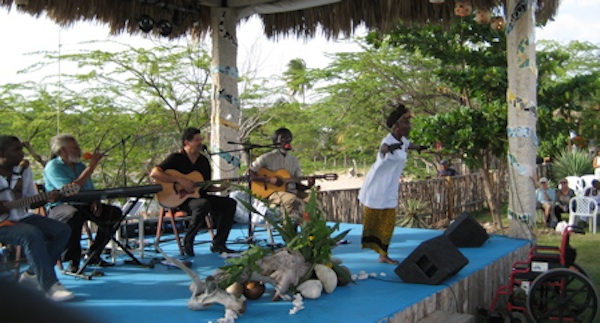 Calabash, the Caribbean literary festival, is an outdoor church of the written word, rocking and resonating on the south coast of Jamaica with the voices of poets and writers from Hong Kong, New York, Barbados, Nigeria, London, San Diego and Boston, among other home addresses.

In this first of our conversations from Treasure Beach, Pico Iyer is preaching. All his life, the Dalai Lama has been friend and inspiration. Zadie Smith is queen of his literary realm. And now Barack Obama is his “global soul in the White House.” Pico is our model of “global attitude,” in short. Born in England of Indian parents, he went to school and university in the United States and has lived 21 years now in rural Japan, on a tourist visa. 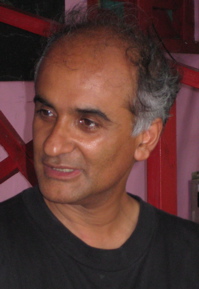 Before coming to Jamaica, I might have thought of it as a marginal place. Now that I’ve been here, I can’t say that. It’s not at the margins. You’re right that it’s on the edge of the great America as Ireland was on the edge of Britain, but it’s as central as New York. It has the same number of influences coming here – you an Irish-American person, and here’s me, an Indian-Japanese person. We’re converging by the sea in Jamaica, surrounded by other mongrels, like ourselves. And the conversation is at least as rich here, as in New York, but perhaps richer. We can’t talk anymore about a center of empire and a victim of empire. The empire is global and Jamaica is having its say, to London and New York, and London and New York have to attend to it.

It’s interesting that the writer that you and I have most celebrated during this conversation, Zadie Smith, is half Jamaican, half English – she lives in New York. But in her life, because she’s such an accomplished novelist and essayist at her young age, she is a way of saying, “I’m going to bring my Jamaican heritage as well as my English and American heritage into the center of Western thinking, and the center of Western writing,” in exactly the same way that Barack Obama willy nilly is bringing Kenya into the White House, and into the center of traditional power. So that Kenya now can say, “We have our guy in the White House. The most powerful man in the world is from our little tribe.” They can legitimately say it as much as somebody from Kansas can say it. And I think Jamaica now is empowered in that same way. They can say that one of most exciting novelists in the English language, Zadie Smith, is coming from Jamaica, and is channeling Jamaica into, and bringing it together with her English part, and now her American life.

In Tibet the Dalai Lama was an embodiment of an old culture that, cut off from the world, spoke for an ancient, even lost traditionalism; now, in exile, he is an avatar of the new, as if having traveled eight centuries in just five decades, he is increasingly, with characteristic directness, leaning in, toward tomorrow. 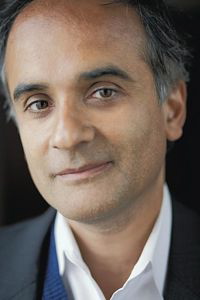 The Dalai Lama becomes the best sort of New England Transcendentalist in Pico Iyer’s crystalline meditation on the family friend he’s been watching and interviewing for 40 years — that is, almost all his life. The book opens with an epigraph from Henry David Thoreau (“So simplify the problem of life, distinguish the necessary and the real…), closes with Ralph Waldo Emerson (“Nothing is secure but life, transition, the energizing spirit…”) and is brim-full of William James’s wisdom on science, psychology and religion. The title comes from D. H. Lawrence’s paraphrase of Emerson’s child, Walt Whitman: “The great home of the Soul is the open road. Not heaven, not paradise. Not ‘above.'”

Pico Iyer is himself a man of that open road — born of Hindu parents, both from Bombay; schooled at Oxford; long an American citizen; now based at TIME magazine and in Nara, the ancient capital of Japan. In journalism’s upper reaches these days Pico Iyer’s pieces from Havana, Phnom Penh, Damascus and Delhi set the standard of global curiosity and confidence — of the child-like eye and Old Masterly prose. But there is a home inside this traveler. The joy of our conversation was finding that he has vital roots not far from my own, in those beloved New Englanders. “I would like to call myself a Transcendentalist,” he says. “The higher form of globalism, I’ve always thought, is Emerson. That’s why I chose to write a book about the Dalai Lama: because he’s talking globalism but not at the level of Microsoft, McDonalds or Britney Spears, but at the level of conscience, imagination and the heart.” 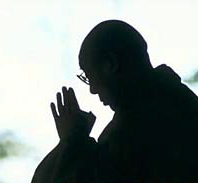 Take this conversation with Pico Iyer as a first crack at the Tibet questions that will not go away in this year of the Chinese Olympics. This book, The Open Road, is a brief for the Dalai Lama’s brand of urgent patience (“Speak out, not lash out,” as Pico Iyer puts it) which many Tibetans and others find hard to hear. The hope in the Dalai Lama’s circle seems to be that under constant world pressure the Chinese leadership would deign finally to meet with the exiled holy man. “He doesn’t expect the Chinese leadership to come to its senses overnight,” says Pico Iyer, but neither does he see fruits in militancy. “He knows that to prick their pride is to bring down even greater hardships on Tibet.”

Tell us, Open Sourcerers: who has a better take on responsibility, compassion and possibility with respect to Tibet?