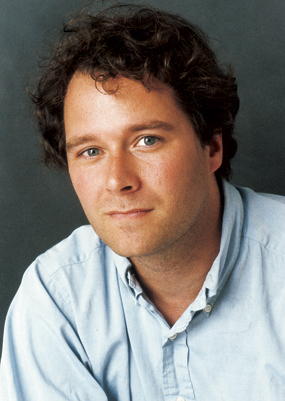 Dan Chiasson has the easy charm of a natural New England oracle, in a tradition encompassing Emily Dickinson and William James, Robert Frost and Robert Lowell. When he reads the poem “Train” from his new book Where’s the Moon, There’s the Moon, you’ll picture that Boston-Fitchburg railway that Thoreau ranted at in Walden. When he reads his six compact lines on “Falls, Bristol, VT,” you’ll see the poet playing waterfall, having fun with his Emersonian “self.”

The waterfall runs all day and night,

shedding big self on the rocks below,

That voice of the “natural” took some cultivating. Dan Chiasson can see himself as a French-Canadian kid from wrong side of the tracks in rural northern Vermont. “My Vermont was full of fire escapes and convenience stores,” he has said. His father took off before Dan had a chance to say hello. Dan went to a Catholic high school with an inspired English teacher, then to Amherst College and to Harvard for a Ph. D. in literature, with Helen Vendler, among others. He didn’t start thinking of himself as a poet until he audited Frank Bidart‘s class at Wellesley. Now he’s tenured at Wellesley himself, colleague and maybe successor to Bidart and another prized mentor David Ferry. In three books of poems Dan Chiasson’s bite is more and more his own. In Natural History one poem in the voice of the poet-critic Randall Jarrell observes young Dan’s progress:

He tried on the confessional style for a while.

If people hurt you, tell on them: perhaps you’ll heal.

If language hurts you, make the damage real.

This is a poet of balanced clauses and complete sentences, ending with periods. He also likes stepped couplets and quick-fire bursts of poems in short, matched forms, like the ten 8-line “swifts” in Where’s the Moon…. With a title spoken by his first son, then 2, Chiasson’s new book is enmeshed in the mysteries of sonship and fatherhood.

Infinite capacity for love in the smallest detail;

infinite suffering in the innermost reality…

What’s the talent you’d most love to have that you don’t — yet?

I would love to be an amazing tennis player. I could take anybody anytime anywhere and beat them. I’d like to be a great tennis player.

When you think of all the expressive possibilities, including baseball and space flight, who do you think of as people doing the work of your spirit, your imagination, in another way?

There’s this guy that I’m friends with, Paul Harding, who’s just written Tinkers, this wonderful book. I would like to have written that book.

There’s the amazing super short story writer Lydia Davis, whose collected stories was just published. And I just lived, and am still to some extent living inside that book. The mind on display there is as extraordinary as any mind I know.

The French filmmaker Chris Marker’s early science fiction movie La Jetée. It’s twenty minutes long, so you can watch it over and over and over again. If you don’t know it, it’s entirely still photography, except for one scene where a woman’s eyes open. Something about the arbitrary constraint of making a movie only with still photographs in order to allow for or arrange for this transcendent moment where you actually violate the rules that you’ve created for yourself—that feels a lot like writing poetry to me. You create a set of arbitrary rules. Even if you’re writing free verse it’s a totally rule-bound environment when you’re writing poetry. And so the moment when you transcend or transgress those rules will feel extraordinary. That’s what I love about that.

I would love to compare myself to some athletes. I can remember watching Pedro Martinez during those great seasons: ’99, 2000. It was like watching pure intelligence work itself out in relation to an adversary. It was just astounding, gorgeous and so full of mind. He was 5’ 10” or something; I’m 5’ 10”, so I had a sort of identification with him.

What do you think of as the keynote of your personality as a poet?

What I strive for is a kind of athleticism. I want not to have to linger in any thought or emotion or point of view for too long. I like to get from place to place rapidly. I hope to find some kind of intensity, but that allows for self-mockery, self-caricature. I guess the keynote would be inner conflict, inability to decide about and rank language, ways of thinking, ways of feeling.

Do you think of yourself, your work, your writing in a historical context? When they remember Dan Chiasson someday — way back in 2010 — what will they say of your setting?

I think that all the other remarkable forms of entertainment and forms of diversion that greet us now in this moment put an enormous amount of pressure on poetry. What I’m doing and what poets that I admire are now doing are figuring out viable accounts of interiority that allow for all the passing mental stuff, but don’t totally concede the inner life to external buffetings of information and the sense that if you could Google something infinitely, you would know it fully. What I’m doing is trying to figure out ways to keep some mystery of the self and language alive.

When the day comes, how do you want to die?

Boy, I’m too superstitious to name a way, because I think it’ll happen when I walk out the door of this bookstore.

Do you have a motto?

Is there a perfect poem out there in the world?

Yes, many. One would be Sir Walter Raleigh’s “Three Things There Be.” It’s a warning to his son. It’s about being a good boy so you don’t get hung. That’s a perfect poem.

The other poem would be Elizabeth Bishop’s “The Shampoo,” which is an amazing love poem, one of the most beautiful love poems I know.

Dan Chiasson, at the Grolier Poetry Book Shop at Harvard Square, with Chris Lydon. May 27, 2010.