Ten days into the “long now” of President Barack Obama, we’re embarked on an unsystematic series of conversations about the man and what feels more like music than politics. The philosophical text in this exchange is from Frank Sinatra, as quoted by Bono the other day in “Notes from the Chairman” in the New York Times: “Jazz is about the moment you’re in,” quoth Sinatra. “Being modern’s not about the future, it’s about the present.” 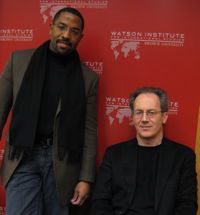 Professor James Der Derian, the author of Virtuous War, is a “magical realist” in international relations. He sits imaginatively at the intersection of security issues and culture questions (that is, of the military and entertainment industries) in the digital age. He is the first here to acknowledge Obama as a creative master of a different way of connecting different dots. Hanging on to his Blackberry is the right metaphor of Obama’s politics. “He gets the importance of interconnectivity,” as Der Derian puts it, “the importance of getting outside the Washington bubble, of keeping in touch with distant and dissident viewpoints, with mass politics as compared to Beltway politics.” Our agenda with Obama’s “in the now,” Der Derian suggests, is not about restoring normalcy or about revolutionizing politics — it’s about improvising in a context of disorder without losing contact with his and our harmonic structures.

Professor Corey D. B. Walker is a scholar of philosophy and religion, a protege of Cornel West, an anti-imperialist of some subtlety — who hears the resounding pledges to “restore American leadership in the world” as a not-so-subtle euphemism for extending American empire by all the familiar, discredited means. His fear seems to be “velvet glove” imperialism. But he can imagine also that in the moving heart of Inauguration Day — which sandwiched the President’s speech between Aretha Franklin’s “My Country ‘Tis of Thee” and Reverend Joseph Lowery‘s rainbow of black, brown, yellow, red and white — we have glimpsed perhaps a vast renewal, a “democratic humanism,” and the “beloved community” that Martin Luther King Jr. held up as our common goal.