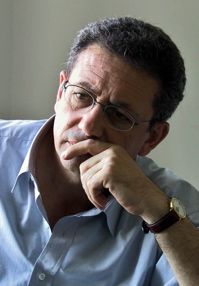 Ask Palestinians why there is no Gandhi in their movement, and often the answer comes: but there are several, and Mustafa Barghouti should be recognized more widely as one of them.

A medical doctor, born in Jerusalem in 1954, trained both in the old Soviet Union and in the US, he is the advocate of a strong, non-violent push to a two-state deal with Israel. He got his break in the show biz of American opinion last Fall on the Daily Show. His B. D. S. campaign this Spring in the world press and on American campuses stands for Boycott, Divestment and Sanctions to bring the pressure of international attention and law on the Israeli government.

Mustafa Barghouti has set his own course in the famous Barghouti family and in Palestinian politics. With Edward Said and others in 2002, Mustafa Barghouti helped found the Palestinian National Initiative. He was the Initiative’s candidate (and ran second to Mahmood Abbas) to succeed Yasir Arafat as president of the Palestinian Authority in 2005. His Initiative banner waves for “a truly democratic and independent ‘third way’ for the large majority of silent and unrepresented Palestinian voters, who favour neither the autocracy and corruption of the governing Fatah party, nor the fundamentalism of Hamas.” In a long conversation at Brown’s Watson Institute yesterday, Dr. Barghouti seemed a model of the old virtues: patience, long-suffering, gentleness and a certain deep enthusiasm.

There isn’t any place in the world where apartheid is so systematic as it is today in Palestine… You are talking about a situation where we the Palestinians are prevented from using all our main roads because they are exclusive for Israelis and Israeli Army and Israeli settlers. This did not happen even during the segregation time in the [United] States. People could not use the same bus or same restaurant. But here you can’t use the same road even. I am an elected Member of Parliament. I ran for president in Palestine; I was second in the presidential race. I was born in Jerusalem. I worked as medical doctor, as a cardiologist, in a very important hospital in Jerusalem for 15 years. And since five years I am prevented, like 98 percent of the Palestinians, from entering Jerusalem. If I am caught in Jerusalem, I could be sentenced to seven years in jail.

This is unbelievable. You have a situation where a husband and a wife cannot be together. If a husband is from Jerusalem and his wife is from the West Bank, or the opposite, they cannot live together. Because if the husband or the wife comes to the West Bank they lose their ID, they lose their residency. And the wife or the husband from the other side cannot be granted citizenship in Jerusalem. We have never seen a situation where a country occupies a city like East Jerusalem and then declares the citizens of the city — who have lived there for hundreds, and some of the families for thousands of years — “temporary residents.” And if one of them goes out to study at Brown for five years for instance, they would lose their residency. This is what you see are acts of ethnic cleansing.

There isn’t a place in the world where officially the policy is, if I have a person with a heart attack and I need to get him to a hospital in Jerusalem or in Israel, I have to get a military permit from a coordinator in the military headquarters. And this can take hours or days, or it can not be granted at all. I’ve had patients die in front of my eyes because I could not get them through the checkpoints. We had 80 women who had to give birth at checkpoints, and 30 of them lost their babies. And to me, the fact that a woman cannot give birth in a dignified manner, and having to give birth in front of foreign soldiers out in the street, is equal to the utmost injustice. Tell me, where does that happen anywhere in the world? And this is happening by a country that is claiming that it is a democracy and that it is civilized. And by people that have had suffering in the past. I mean, that’s what amazes me, you know. People who understand how terrible it is to be discriminated against…

So we ask ourselves: how do we make the Israelis change their minds? How do we convince them to stop the oppressive system which is hurting our future and their future? …We have to make their system of occupation painful; and we have to make their system of occupation costly. This can be done through only two ways: either you turn to violence, which I totally disagree with, I don’t believe in and I think is counterproductive; or you turn to non-violence and mobilizing international pressures on Israel, as people did in the case of the apartheid system in South Africa. If it wasn’t for the divestment sanctions campaign in the 80s and 90s we would never have seen the apartheid system fall apart in South Africa, simply because the balance of forces between the regime and the people is so big in the interest of the regime. We have the same situation in Palestine. That’s why I speak about divestment and sanctions to encourage non-violence. This is the only way we make non-violent resistance succeed, by having an international component, especially in the United States. We are not talking about boycotting Israel, or Israeli people. We are talking about boycotting occupation and about divestment from occupation and military industry that is exploiting people, that is destroying people’s lives and that is consolidating an apartheid system. So we are calling for divestment from occupation and apartheid and injustice…

Let’s say we have a Palestinian state and an Israel state. This will make many Israelis calmer because they will not be afraid about the Jewish nature of Israel as a state, although 20 percent of its citizens are Palestinian today. Eventually there will be cooperation between the Palestinian state and the Israeli state, economically, say. I don’t see a problem with us and Israel joining the European Union together, for instance. But Israel has to answer a bigger question.

I mean, Israel is not an island in the ocean. Israel is an island in the Middle East. What we have so far is an Israeli government that is always in conflict with others. They seek conflict, in my opinion, and they use this conflict to justify oppression of Palestinians, and to justify a lack of solutions to the Palestinian-Israeli conflict. First it was the Soviet Union: they could not make a solution because a Palestinian state would be closer to the Soviet Union, for instance – or with Egypt which was at that time closer to the Soviet Union. Then it was the problem of Egypt and Syria, and then they had peace with Egypt and ceasefire with Syria. They had a problem with Iraq. Today they speak about Iran. Tomorrow if Iran is no problem they probably will start speaking about Azerbaijan. They keep looking for an external justification for a problem that’s internal.

Many Israelis speak of this. And they ask: in a globalized world when you have economic cooperation, why does Israel want us not to be a democracy? Why did they kill twice already our best experiences developing a democratic system – once in 1976 when we had the first municipatlity elections, and they didn’t like the results. At the time there was no Hamas; at that time Israel was cooperating with Islamic parties against the secular national democratic groups like us. And they killed the results of the 2006 elections which were praised by the United States and the world community as the best democratic elections in the Middle East. You see, I see racism here. Why are Israelis entitled to democracy and Palestinians are not? The question is why are they afraid of us being a democracy? Because we will have a government that cannot be manipulated?