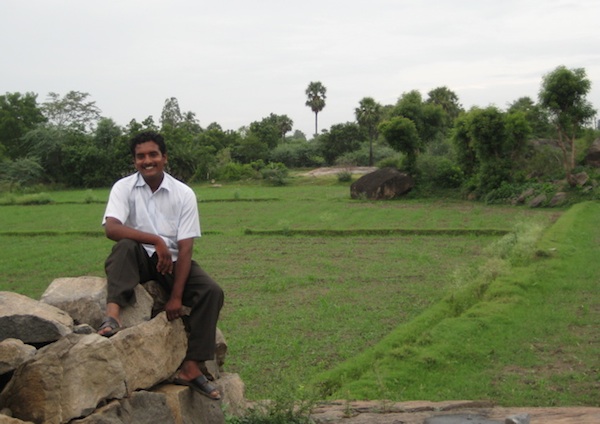 Barathi Raja Reddy is the Indian entrepreneur we didn’t expect to meet.

He’s a young man of the Old India happy to be dropping out of the New.  He is a soft-spoken Hindu nationalist who enjoys the social comfort of his land-owning upper caste, denoted by the name Reddy. 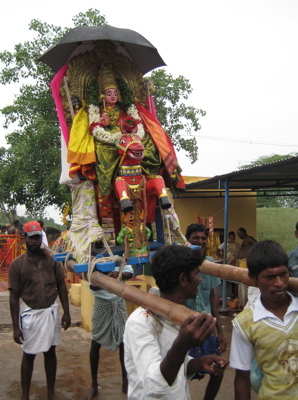 As he guides us around a mid-summer river festival in honor of a local god who brings rain and safety to Barathi’s village, he is acting out his devotion to the colorful rituals of a uniformly Hindu culture. He says he’s fond of the many Muslims he knows face to face, not so fond of the Muslim masses he’s never met in Pakistan and Iran.

He’s impatient at age 24 for his parents to arrange an appropriate same-caste marriage that family and village will all approve.  And he’s ready to assume the burden and glory of farming the beautiful acreage that his grandfather bought, irrigated and cultivated more than 50 years ago.

So Barathi is moving this summer from the bustle and pollution of Bangalore, where he’s been driving cars, taxis and auto-rickshaws (Vespas with a covered seat for 3 passengers) for 70 hours a week the last three years. And he’s reimagining his life a couple of hundred kilometers to the south, in the state of Tamil Nadu. He will be growing rice and sugar cane and building his own plastic recycling plant in the cause of greening India and enriching himself, if he can, by hard work in an emerging industry.

“Why not?” he said, flashing that handsome smile.   Indian cities are over-rated, Barathi remarked. Indian city-planning is a failure, he’s concluded. Bangalore is over-populated and over busy. It’s polluted and stressed, no place to be bringing up children. So he is happy to be moving against the tide, back toward home.