Franz Wright grew up as an estranged son of a famous American poet. At 18, he’d read everything, found an addictive pleasure writing poetry (“like a first shot of heroin”), and learned “there was something wrong with me.” Nowadays he writes — in a sustained ten-year burst of celebrated work — with the goal of seeing the world through the eyes of suffering outsiders, in particular the severely mentally ill, and to use his own life as material — to mine his own suffering, as T. S. Eliot said of Beaudelaire, “for theoretical purposes.” 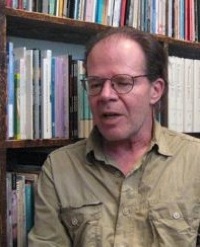 A: There was this incredible generation of poets — miraculous, like the Elizabethan Age or the Renaissance — poets born in the late 20s. You can count them: Robert Bly, W.S. Merwin, James Wright, Galway Kinnell, Philip Levine, Jean Valentine.

But many poets have found themselves living in that shadow. We have our own: Mark Doty … Louise Glück is probably the best poet writing in this country today. Fanny Howe and Jean Valentine are the two poets right now in America most representative of a powerful and unabashed spirituality in their work. I have infinite admiration for them.

Primal sincerity is what I am interested in, and that is very quaint to some young people. We’ll see what they do. I believe, like [Ezra] Pound that only emotion endures.

Brian Eno is someone very precious to me, the great inventor of ambient music. I love the actress Cate Blanchett very much. The novelist Denis Johnson and I are friends. I love him. He has an almost Dickensian ability to create the notion of who the character is by simply the language they use, by the way they talk. It reminds me of Shakespeare, it reminds me of Dickens.

Q: Talk about the times.

A: I think it’s a very lost, drifting sort of time. Most of the world’s leaders aren’t worth the ink it would take to write their names.

Most of them, I think. But if someone were to offer me the chance to live my life all over again I would do exactly the same thing. I feel very blessed.

Work, man. Inspiration is not something that occurs to you, it is something you strive for.

I think of Franz Wright as a man who’d have invented the Catholic Mass if it hadn’t presented itself to him: the daily ritual of the savior’s sacrifice, death, resurrection and our forgiveness. “The central symbol of the Eucharist,” he explains, “is a family or friends sitting down at a table to eat, raised to a cosmic level… It represents the last supper of Jesus with his friends… There’s nothing more moving in the world to me. I could not have made that up.” Franz Wright’s poems speak with that wonder and thanks, also with an often searing wit. His new collection is Wheeling Motel.