Click to listen to Chris’s conversations on the global crisis. (37 minutes, 17 mb mp3)

1. Unless the West suddenly gets a new act together, China wins the global crisis — because it has cash, a production machine, an orderly, top-down system co-designed by Milton Friedman and Stalin, and a domestic market of customers if and when export demand collapses.

2. The turmoil in finance capital has also the dimensions of a “civilizational” crisis (what do we stand for after greed and consumption… of such things as a new Paris Hilton line of apparel, for dogs?) and an advancing crisis of the human habitat, our lifeline with nature.

3. One way to see Barack Obama in this situation is as “our Gorbachev”: the designated captain whose assignment is to save the crumbling pillar on our side of the old Cold War, or surrender the regime.

By the old rule that the trick in life is to locate three main points (in anything), there’s my free translation of a fascinating Watson Institute conference last weekend. Between the lines, most of it, but clear enough.

Ugo Mattei is the “color” man in this conversation. He’s a law professor in Turin and Los Angeles, a Gramscian lefty, who contributed the Obama-Gorbachev connection and said that what the world really wants from the United States at this point is “a declaration of intellectual bankruptcy.” 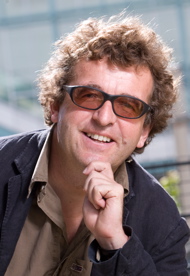 You can’t transform human experience into a technological game. There has been a complete distortion, I think, in the way of thinking in these last 25 or 30 years in the United States: that just because they were enjoying a technological advantage, that meant that they were intellectually superior to the others. So either there is now a humble declaration of bankruptcy of this kind of attitude, and all the rest will follow, or we’re back to the beginning. There is so much to be done in dismantling the military apparatus, and nothing is happening on this side. Talking about the “greening” of capitalism and all this kind of stuff while the world is infected by American military bases, with nuclear weapons, with consuming a lot of energy, creating a disaster wherever they are (socially, morally, intellectually) is only once again talking of all these things as if they can be understood in terms of numbers. This thing has to be understood politically. It requires a new humanism. It requires a vision of the long-term. It requires a real transformation. This is why I hope the crisis is going to go really, really bad, so that then we can restart.

Ugo Mattei in conversation with Chris Lydon, March 14, 2009 at the Watson Institute.

Alfred Gusenbauer is the credentialed heavy-hitter here. A Socialist former Chancellor of Austria, he sounds troubled by the Obama team’s emphasis on a unilateral re-stimulation of an overfed American economy. 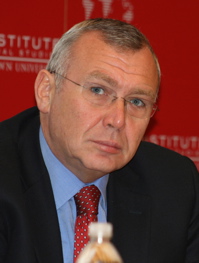 In history, a crisis of this size normally led to revolution or war. Our task nowadays is to handle the crisis, overcome the crisis at least without war, but with a revolution of our minds. I think it is utterly necessary…

I think that there are still three options: one is the fundamental crash of the world economy. The second is what we call the Japanese experience: more or less stagnation for the next ten years. And the third is that we will be able to solve the crisis within the next two or three years. But this only will be possible if there is an international management that is trying to reconcile some of the fundamental imbalances that are inherent in the world economy. Without balancing those, there is no way out of the crisis…

The pursuit of greed will not help to solve the crisis. There will not be recovery without redistribution… If nations or social classes pursue what they have done, and what led to the crisis, there will be no way out. One has to understand that the key to the recovery is the abandonment of the concept of greed and to adopt a concept of sharing.

Alfred Gusenbauer in conversation with Chris Lydon, March 14, 2009 at the Watson Institute.

The other strong contributors here are sociologist Ho-fung Hung of Indiana University, Bloomington; journalist and documentarian Nandan Unnikrishnan of the Observer Research Foundation in New Delhi; and the Indian businessman Samir Saran.