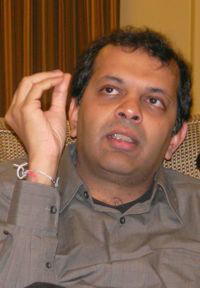 Suketu Mehta, the master storyteller of modern Bombay, learned by listening — to the runaway poet from Bihar, for example, who wanted him to write a book titled “Untold Stories” or “Untellable Stories,” like his own.

He was a boy of seventeen who had run away from the poorest state of India, Bihar, to come to the big city, not to work in the movies, not to make a fortune but to write poetry. His father wanted him to be a scientist. So this kid slept on the sidewalks and he took me all around the city and showed me how he ate, what he had to pay to go to the bathroom, the small and great scams of the city. And he went all around the city writing poetry. And then I asked him if he had contacted his parents — he had run away from home — and he said he hadn’t, and so I said he might want to notify them. They must be worried. He wrote a postcard to his father, and his father took the next train over from Bihar. I got a phone call one morning from the kid saying his father had arrived in Bombay and was taking him back to Bihar, would I meet them for breakfast? And I did. The father was a lovely man, a science teacher from a small village, and he said he had come to collect his son. The parents had been worried sick about him. I said, “Well, now that you’re here, how long will you stay?” He said, “Oh, we are taking this afternoon’s train back.” Now, Bihar is at the other end of india. It’s a three day train journey. He’d just traveled for three days; he had come that morning and he was going back that afternoon. I said: “Why don’t you stay? This is a fabulous city, a great city. You can see the Gateway of India, you can see where the Bollywood stars walk around.” He said, “No, I have no interest in all of this. I want to get out of this city as fast as possible, because all these big buildings, they have been built by stealing somebody else’s money.” Essentially, he was paraphrasing Balzac without knowing it: “Behind every great fortune is a great crime.” And his son kept saying to his father, “But this is my karma-bhoomi” — the proving-ground of my destiny.” And the father said, “No, this is paap-ki-bhoomi” — the land of sin…

Suketu Mehta with Chris Lydon at the Watson Institute, 12.3.09.

Suketu Mehta went home to India to track the migration — soul by soul, the reader feels — of a “nation of villages” into megacities on the scale of Bombay, now Mumbai, where people name the trickle of the open slum sewer after a river back home. His masterwork Maximum City, did for Bombay what the immortals Dickens and Balzac did for London and Paris; except that the sprouting of mushroom slums and high-rise spikes in India may be running 20 times faster and bigger. Suketu Mehta is the great expositor by now of a reckless, universal love affair with mostly miserable megacities. “Right about now, for the first time in history,” he remarks, “more people live in cities than in villages. We have become an urban species.” He is the expositor, moreover, of a method of listening for the unofficial narratives of the time: myths told in temples, migrants calling home, letter-writers composing messages from prostitutes to their parents, assuring the family that their daughter has a good office job and that money is on the way.

Suketu Mehta is telling me also that from the old India of starving cows and sadhus to the new one of Bollywood and billionaires, there’s a very old ping-pong game of ideas going back and and forth between India and the United States: from the Bhagavad Gita to Henry David Thoreau (“In the morning I bathe my intellect in the stupendous and cosmogonal philosophy of the Bhagavad Gita, in comparison with which our modern world and its literature seem puny and trivial…”); from Thoreau’s Civil Disobedience to Gandhi’s satyagraha in South Africa and India; from Gandhi to Howard Thurman and Martin Luther King Jr., and from Dr. King to Barack Obama and Prime Minister Manmohan Singh. The game, he’ll persuade you, isn’t over.