This is a rerun, prompted by the HBO series My Brilliant Friend, based on the  “Neapolitan Novels” of Elena Ferrante.

Ferrante’s identity remains beguilingly unknown, but she has put so much of her life and world in this masterwork that we’re not going to dwell on that part of the mystery.

Instead we’ll count the many faces of her novels. From the outside, the books look innocuous enough: their covers are airbrushed photo collages of mothers, daughters, and girls in Mediterranean scenes. But deep down they are roiling, and white-hot: with male violence, women’s resistance, pleasure, trespass, and loss. Think of Charlotte Perkins Gilman’s “The Yellow Wallpaper” rewritten into a feminist epic.

Ferrante pushes the story over a long roller-coaster arc, and it can be as gripping as soap operas, HBO, or Harry Potter and—at moments—as deep and humane as Proust. A few of the things these books are doing:

The psychology of a friendship.

The Proustian gene shows itself from the very beginning of the novels: when Elena Greco—an aging, successful writer from Naples—hears that her best friend Raffaella Cerullo, whom she calls “Lila,” has disappeared from her home.

Greco decides to set down their entire friendship on the page: every meaningful moment, from school competition through teenage cruelties, weddings, vacations, and shared pregnancies.

All the while Elena and Lila become closer than close—almost interdependent in a sometimes tense and jealous pairing. The joy of the book comes from standings inside the two friends’ field of influence: where does one friend end and the other begin? Who would they be without one another?

Our guest Dayna Tortorici, co-editor of n+1, reads Ferrante’s whole body of work—she wrote shorter novels before the “Neapolitan” series—as a sensitive portrayal of women’s power in practice and across history.

Not as high-falutin theory, but almost as gossip:

Ferrante’s novels animate these ideas with a generous clarity. In her work, you can see how the mother-daughter paradigm operates in all relationships between women without reducing them to cardboard… Ferrante has given intellectual and literary women an invaluable gift: books that speak to them in a language their mothers can understand.

By the end, Ferrante’s two brilliant heroines have clearly come a long way from the fates of their mothers, eaten up by abusive husbands and the fatigue of motherhood. But also not as far as we might have hoped.

A dark theory of history.

That leads to the most shocking thing the novels do: they become political and philosophical; right when you think Ferrante will spill all her gossip or tie up her threads, she stops short.

It begins in postwar Naples, a world of poverty and danger:

Our world was like full of words that killed: croup, tetanus, typhus, gas, war, lathe, rubble, work, bombardment, bomb, tuberculosis, infection. With these words and those years I bring back the many fears that accompanied me all my life.

It ends in a Naples that has been “developed,” put through the wringer of fifty years: Communist-Fascist street wars, organized crime, heroin, disaster,  and financial crash.

The narrator Elena Greco sounds like a radical philosopher when she holds forth on the lessons of her hometown in the final volume:

Naples was the great European metropolis where faith in technology, in science, in economic development, in the kindness of nature, in history that leads of necessity to improvement, in democracy, was revealed, most clearly and far in advance, to be completely without foundation.

To be born in that city— I went so far as to write once, thinking not of myself but of Lila’s pessimism— is useful for only one thing: to have always known, almost instinctively, what today, with endless fine distinctions, everyone is beginning to claim: that the dream of unlimited progress is in reality a nightmare of savagery and death.

The radical politics failed; the violence rattled on. What remained constant was the interpersonal enchantment of two women, two wills, in a hostile place. Sabine Weiss, “A Street in Naples”

By the way, Michael Reynolds, the (English) publisher of Ferrante’s novels, spoke to us about the Ferrante phenomenon this week in prep for our show. You can listen to an excerpt of our conversation here:

Have you read Elena Ferrante? Leave a comment below, and please tune into the show.

According to Henry Kissinger, “Donald Trump is a phenomenon that foreign countries haven’t seen.” Don’t tell that to the Italians. The parallels between Donald Trump and former Italian PM Silvio Berlusconi are as striking as they are frightening. Both men catapulted their way to power by running against the establishment as outsiders, billionaire “every men,” freed by money and power to be as lewd as anyone.

Mixing show business with politics, Trump and Berlusconi, both tireless salesmen, promoted their own personal brands as solutions to political gridlock and national malaise. Despite their notable conflicts-of-interest, these strongmen present themselves as a panacea for all their countries’ woes without offering any comprehensive political programs for relief. The cult-of-personality surrounding both men gives them both a sort of Teflon defense against personal scandals: attacks on the cruder aspects of their personalities—their raunchy rants and sex scandals—don’t stick and do little to derail their quests for political power. And what does it tell you that both men have also developed close relationships with another vainglorious world leader, Vladimir Putin?

To get the Italian perspective on Trumpismo—what might be called the Berlusconi Doctrine, American-style—we turned first to our favorite public radio paisan, Sylvia Poggioli. Poggioli gives us a broad reportorial take on the havoc wrought by Italy’s own vulgar, business-minded, anti-professional TV mogul.

Alexander Stille—the Italian-American journalist who articulated his own connections between bunga bunga banter and Trumpian masculinity for The Intercept in March—adds a more theoretical interpretation. Stille helps contextualize Berlusconi as “the first post-modern politician”—a master of visual media and entertainment politics who can effortlessly spin truths to his advantage.

Also joining us is Sabina Guzzanti, the satirist and filmmaker who emerged as one of the prominent Italian gadflies in the Berlusconi era. Guzzanti mercilessly provoked the thin-skinned prime minister and his Mediaset broadcasting empire with ruthless critiques and satirical jabs on her late-night TV show Raiot. After the program was muted by censorship and lawsuits, Guzzanti crystallized her critique of Berluscanismo in the 2005 documentary Viva Zapatero!

Bill Emmott, former editor-in-chief of The Economist, rounds out our program with the imperial view from the editorial board of the magazine that went to war with “the man who screwed an entire country.”

The lessons learned from Berlusconi present a rather grim view of America’s future under Trump. But we also shouldn’t forget that one of the key appeals for both Silvio and the Donald lies in their consummate skills as entertainers. The old joke about Mussolini’s fascist leadership of Italy was that “at least he made the trains run on time.” For Berlusconi, the best that can be said, maybe, is that at least he could sing in tune:

What might the tenor of the Trump administration, with its even crasser model of carnival-barker showmanship, sound like?

The feeling, over a 20-year Berlusconi era, is that the left in Italy was fiddling while Rome was burning. Nobody had (or has) an answer to the charming strong guy. “The left really doesn’t know what to say,” the political science professor Daniele Albertazzi says. (And international media pressure from the likes of The Economist didn’t amount to much, either.) For example, Romano Prodi (Goldman Sachs advisor, two-time PM, and founder of Italy’s Democratic Party) and Matteo Renzi (union basher who took up the Democratic Party mantle as PM from 2014 to 2016) offered few answers. The center did not hold. Albertazzi is a professor at the University of Birmingham in UK who studies European populist movements. Hear a short interview below: 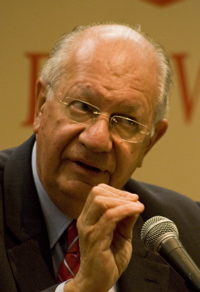