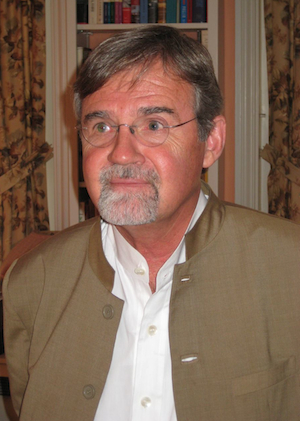 Kai Bird, as a Pulitzer-grade biographer and historian, is drawn to the apocalyptic. He’s been “obsessed with things atomic,” as he says — with bomb scientist J. Robert Oppenheimer; with the Bundy “Brothers in Arms,” McGeorge and William; and now with the Middle East, where he grew up, and especially Jerusalem, “a city where apocalyptic literature was born and nurtured.”

So it is striking that opportunity is the keynote of Kai Bird’s memoir Crossing Mandelbaum Gate, from his boyhood past the check-points of Arab and Israeli Jerusalem in the 1950s. His half-century chronicle is of promising roads not taken, yet in both the book and our conversation, he is talking today about an epochal turn, in Arab and Israeli thinking, out of stalemate toward secularism and sanity. There’s an extension in spirit here of the stubborn pragmatism that Mustafa Barghouthi voiced with us about a non-violent route out of fanaticism.

At the core of Kai Bird’s vision, Barghouti’s too, is an old idea among Zionists, early and late, of a “Hebrew Republic.” It is the vision inside Bernard Avishai‘s writing from Jerusalem today and his 2008 manifesto The Hebrew Republic. It was much the same vision that fired a fabulous, largely forgotten character that Kai Bird introduces from the 1940s, Hillel Kook:

Even though he was a member of the Irgun and working with Menachem Begin at that time… [Kook’s] argument was that the new state should be secular, very much a division between synagogue and state; that this would open the door to a society inclusive of non-Jews, Christians or Muslims that were also in the state; … that the state would be imbued, drenched in Jewish culture as such; but the state’s identity would be based on its language: Hebrew. And as such, the state of Israel would become a state like any other state. The Hebrews of Israel would be Hebrews, like Frenchmen in France. It would be a modern 20th century secular state…

I would argue, as does Bernard Avishai in his brilliant book, that Israel is going in that direction. Most Israelis live along the Mediterranean Coast in Tel Aviv, and they’re highly educated, inventive, cosmopolitan, high-tech and productive members of their society. They’re secular, and yet they are drenched in Jewish culture and in the Hebrew language. And If Israel becomes more of a Hebrew republic and less of a Jewish state as such, that opens the door to becoming good neighbors with their own Israeli Arab citizens but also with their neighbors in the West Bank and Egyptians and Syrians. It becomes less a religious conflict, and more a question of where the borders are going to be between these states…

Ironically, the radical revisionists of the 1930s and 40s envisioned a secular republic. They did not talk about a Jewish state. They talked about a state where Jews could simply be modern human beings filled with multiple identities, not simply a religious label… But today we’ve been going for 60 years in the other direction, precisely because the conflict has been prolonged, because Israelis are drenched in a sense of victimhood, not only from the Holocaust, but now from all the wars and the suicide bombers. And they face an enemy, the Palestinians, who also are drenched in victimhood and see themselves as the victims of this 60-year conflict. So it’s a terrible tragedy. So this notion that a secular Hebrew republic as such, a more secular Israel, will evolve over the next 20 or 30 years of globalization is a hope, I would argue, that this conflict can eventually be resolved.

Kai Bird in conversation with Chris Lydon in Boston, May 7, 2010.