You can hear it in Lloyd Schwartz’s reading of “Six Words” that he thought of being an actor. “Speech is his muse,” says his friend Robert Pinsky, noting the gifts that have brought vast affection and staying power to Lloyd and his work. There’s “observation of personality,” Pinsky remarked in a review of Goodnight, Gracie nearly 20 years ago. And “loving attention to homely turns of language, neglected as stray cats; a moral generosity that cannot be called ‘forgiving’ because it declines to condemn in the first place…” Lloyd Schwartz is self-consciously Americanist, a grateful child of Emily Dickinson, for twisting the rules; of Walt Whitman, for breaking them; of William Carlos Williams, for consolidating an “American” language; of Robert Frost, for incorporating American speech into traditional forms; and most specially of Elizabeth Bishop, whose work he collected and edited for the Library of America. 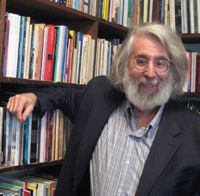 A: I would be an actor. I was an actor for a while, that was my great ambition. And I miss it. That’s probably the reason that I still write monologues, character pieces.

Q: Who is your ideal artist in another medium?

A: Got to say Shakespeare, got to say Rembrandt. But also Vermeer.

A: Some old guy with a lot of gray hair. People say that guy looks like a professor.

A: I would like people to think honesty and a sense of humor.

Q: What is the furthest subject of interest to you from your ability to write about it?

A: Sports or science.

Q: What is the quality you most love in a poem?

The “American” marks on his own poems, Lloyd has said, include “Cheekiness. Humor. Jokes. Perversity for perversity’s sake (that is, to write against the grain of assumptions about what poetry should be).” But can you also hear in his reading that Lloyd Schwartz is the keeper of Boston’s conscience in classical music? That he won the Pulitzer prize in 1994 for his music criticism in The Boston Phoenix?

These People was Lloyd Schwartz’s first book of poetry in 1981. Then Goodnight, Gracie in 1992. He read to us at the Grolier Poetry Book Shop from his latest, Cairo Traffic (University of Chicago Press, 2000).