In anticipation of the 2009 Massachusetts Poetry Festival, which pops into full bloom tomorrow (Saturday) in the city of Lowell, the question has been: where does poetry come from these days? And where is it going?

Michael Ansara stands for the poet lurking in every one of us, and in this conversation he instructs us — revision by revision — how to liberate our inner Wordsworth. Once upon a Sixties time, Michael Ansara was a famous radical. When the boss of the Vietnam war, Robert McNamara was engulfed by hostile Harvard students in October, 1966, Michael Ansara at the head of SDS was ringleading the rebels. He followed his principles into a stormy career of political and union organizing, and he’s a ringleader still, of the second-annual Massachusetts Poetry Festival in Lowell this weekend. It turns out now he was reading serious poetry all his life and in his fifties decided to write some. In a poem titled “19 Weeks,” for example, he’s reflecting on an ultrasound picture of a grandchild in his daughter’s womb; and then he explains to you and me how he worked through Shakespeare and the Thesaurus and 50 or 60 rewrites before he felt he’d given birth to a poem. 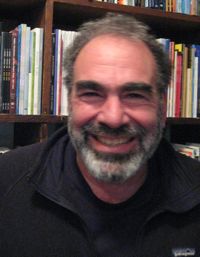 Q: Who is your favorite fictional character of all time?

A: I would say, if I were being truthful, the protagonist whose name I cannot remember for you from The Big Sky by A. B. Guthrie.

Have you ever read that book? It is about mountain men in the 1840s. I think I have read it eight times.

Q: Who do you think of, Michael, as kind of a doppelganger out there? Who does the work of your inner man in some other medium?

A: I have always thought of Bruce Springsteen as a Walt Whitman of our time. I think it would be way too presumptuous but would I aspire to having Bruce as my doppelganger? You bet. And not just because of the crowds, but because of the music of his lyrics as well as his melodies. He tries hard to sing of America: of its people, its place, its soul, its torments, its virtues.

Q: Think of a talent you’d love to have and don’t, yet?

A: Music. I have been taking piano lessons for ten years now and I can no more play than I can fly.

Q: What is the quality you look for in a poem, any poem?

A: I would say it is several. One is music. I want it to sing; I want the lines to sing. The second is vividness of image and I want the image and the line to work with the music of the words so that you hear it in all ways.

Q: When somebody spots you walking down the street who do they suppose you are?

A: Some older gentleman. A little shaggy. A little rumpled. And a little out of place.

A: The understanding that I have an enormous amount to learn. Striving with humility. And willing to work.

Q: What is your motto, Michael?

A: “Work. Work. Work. And try, aspire, to be nice, to be gentle and to hope for some wisdom.