Richard Rhodes is the go-to analyst of nuclear weapons for most of thirty years now ever since the publication of his acclaimed history of the Manhattan project and the mostly men and the science and the political emergency behind it. His first masterpiece was called The Making of the Atomic Bomb. He’s even written a play about the Reykjavík Summit between Ronald Reagan and Mikhail Gorbachev, perhaps the closest we’ve been so far to the total abolition of nuclear arms.

Ahead of our show with Elaine Scarry this week, we’re reminding ourselves of how we got into the nuclear standoff called the Cold War, and how Ronald Reagan dreamed we would get out of it:

The danger of a nuclear weapon being used, whether against us or against somebody else, is actually greater now than it was in the Cold War. But the big difference is that it’s only going to be one or two, and it’s not going to be five thousand or seven thousand … We have to take this very seriously, but at the same time, it’s not a Cold War scenario. 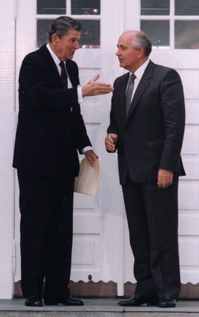 With a nuclear cold war taking rhetorical shape between Israel and Iran, with Pakistan and India ever in range of the brink, it is no academic or merely historical question: how did the US and USSR get out of their four-decade staring contest without a single one of their many thousands of nuclear guns going off?

Richard Reeves’ revisionist appreciation of Ronald Reagan, subtitled “The Triumph of Imagination,” compounds the impression in Gaddis’ history that part of the answer was Ronald Reagan’s Hollywood intuition that the picture of two cowboys each pointing 10,000 six-guns at each other — forever — made for a lousy screenplay. The script needed a doctor, Reagan realized. Around the same time Mikhail Gorbachev remembered saying to his wife, Raisa, “We can’t go on living like this.”

Gaddis writes that to break the human habit of escalating violence, and of using all the tools that worked: “It took visionaries — saboteurs of the status quo — to widen the range of historical possibility.”

The heroes of his story are: Pope John Paul II, who “set the pattern by rattling the authorities” throughout the Soviet bloc. Margaret Thatcher, “who relished being tougher than any man” in reviving the reputation of capitalism in the world. Ronald Reagan, who used his theatrical skills to rebuild confidence at home, to spook Brezhnev and enlist Gorbachev. And Gorbachev himself, who put his private instincts ahead of the party line in softening communism’s emphasis on the class struggle and its old claims of historical infallibility.

But most of the other players in the last half-century — including Truman after Hiroshima and Nagasaki, and Stalin and Eisenhower and most assuredly Reagan — came to realize, each in his own epiphany, that the damned nukes were un-usable.

The lesson among all of us Cold War survivors, Gaddis writes, was that “war itself — at least major wars fought between major states — had become a health hazard, and therefore an anachronism.”

First of my questions, awaiting yours: do the nuclear players and wannabes on the 21st Century stage know the futility of those weapons as well as, say, Reagan and Stalin did?

Second question, especially for Richard Reeves, who recruited me for the New York Times in the late 1960s: as Ronald Reagan’s reputation is revalued upward, what needs to be said of Reagan’s worst enemies in the Republican power elite (figures like Nelson Rockefeller and Henry Kissinger) who envisioned “limited” nuclear conflicts but successfully labeled Reagan for most of his career as the “extremist.”

And which of those Republican forebears — Rockefeller’s imperial personification of oil power and Wall Street, and Ronald Reagan’s cowboy populism — is the true ancestor of the Bush-Cheney-Rumsfeld crowd that rules our roost today?