A new rite of passage is taking hold among ambitious young doctors entering modern practice in a new century. It can take a year or two after medical school: working far corners of the poor world, and sometimes later years split back and forth between a community clinic in rural Malawi and a neurology fellowship at Mass General in Boston. The trend is striking: of the new medical doctors coming out of US medical schools in the mid-80s, one in twenty had spent some real time abroad in healthcare.  Ten years ago it was one in 5. Last year it was one in 3.  So more and more doctors, yours and mine, acting locally, will be thinking globally, with many implications.

Our radio conversation is about the lessons that flow both ways.  Some have to do with technology and drugs, but many more with building ground support in community clinics; also with the training of nurses, even with refining the bedside manner and hands-on, make-do skills of American doctors who arrive, as they say, with “sandals on the ground.”  They come back “thinking different” about who needs what kind of doctoring in the States. Consider this, for example: Bill Gates’s foundation report this winter predicts there will be no more poor countries by 2035, that’s two decades out; we’ll just have an awful lot of poor people in middle-income countries.   We know that problem in the US, and we haven’t turned it around.  But there are clues out there in the developing world and lessons coming home with the young doctors: lessons in community care outside the big hospital ERs; lessons in “accompanying” care, lessons in prevention, in doing more with less and getting sharply better outcomes, also in putting moral urgency behind more effective care for everybody.

There’s an element of mystery, of openness, of trust, in accompaniment. The companion, the accompagnateur, says: “I’ll go with you and support you on your journey wherever it leads; I’ll share your fate for a while. And by ‘a while,’ I don’t mean a little while.” Accompaniment is about sticking with a task until it’s deemed completed, not by the accompagnateur but by the person being accompanied.

Three winters ago our Open Source trip to Cuba turned around on an astonishing moment of serendipity. At a bus stop in Havana my colleague Paul McCarthy heard a laugh he recognized from high school in California. “Only Akua Brown laughs like that,” he blurted. And Akua Brown it was, the friend he hadn’t seen for a decade, now finishing her fourth year at the Latin American Medical School in Havana.

Over the next few days, Akua Brown and her friends poured out their four-year immersion in Cuban life and language, Cuban magic and slang, the Cuban versions of sexism and racism, Cuban boyfriends and families, drums and faith, bureaucracy and student volleyball, and by the way, this strange Cuban thing about toilet seats and toilet paper: the revolution doesn’t seem to believe in either.

But the core of our long conversations is medicine, the Cuban way. This is aggressive, free, hands-on health care that makes house calls, and lingers for the feel of emotions and homelife. Doctors’ training like doctors’ care is free: the payback required of the students here from all over the hemisphere is only that they return to underserved areas of their home countries.

Michael Moore and our friend the Nobel Prize cardiologist Bernard Lown knew the results in Cuba all along. “I have been to Cuba 6 times,” Dr. Lown emailed me, “and learned much about doctoring in Cuba. Their thinking on social determinants of health, on the primacy of public health and the vital role of prevention strategies are unmatched in the world. With spending of less than $200 per person per year for health care, they have achieved health outcomes no different than in the USA where expenditures now exceed $7000 per person annually!”

Keasha Guerrier, a science major from the New York Institute of Technology, knew about Cuban medicine because “my father’s from Haiti, my mom is from Guyana.” But her brother teases her about “blackouts” in Cuba, and she has other relatives and friends who don’t know why she’s there, or ask her to “pick up a box of cigars on the way out.” 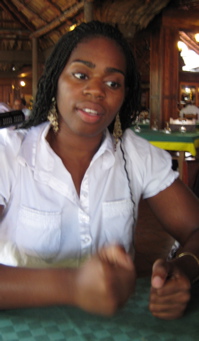 Am I just a pawn in a game the Cuban government is playing? I push back hard against that idea. There are a lot of things that the Cuban government has done that some people might not agree with. But medicine with a community base in training and practice — that is one the things they got right on the nose. They hit the nail on the head. The people who instituted this program saw how it works in Cuba… and they compared Cuba’s situation to countries in Central and South America or third world countries, Africa, Haiti. And they saw how they can make a difference. Here, you do a lot with a little bit… What they are trying to teach us is that you don’t have to be confined to working for a paycheck. But using all the things that you know, you can help a broad base of people. In that respect, I think that the intentions are pure.

Keasha Guerrier in conversation with Chris Lydon over roast chicken with rice and beans at the restaurant El Ajibe in Havana, December 19, 2008

Kereese Gayle grew up in Lousiana and Florida. She was a Spanish major at Georgetown who could see herself coming out of medical school in the US with crushing debts. “My family is Jamaican,” she says, “so we knew about the quality of the Cuban medical system. To this day I know I’m where Im supposed to be.” 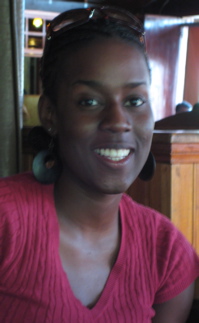 We’re here at a very important time in the history of the world. We’re getting the type of education that I think people are looking for. More and more people are thinking very seriously about the idea of universal health care, about the idea of rights for everyone to basic access to health care. I think we’re going to be a huge part of that…

We learn how to diagnose our patients with our hands, our ears, our eyes more so than with technology–X-Rays, CT scans– because you don’t end up doing those kind of really costly labs as often here. So we definitely have that as an advantage… We learn how to interview our patients thoroughly, and how to do a really thorough physical exam and do it well, and be comfortable with that… Doctors here not only do house visits but they go into homes: they have a form that you fill out to check off what risk factors the person has [in their home]. Is their water contained properly? Do they smoke? We get that kind of first hand view. In the United States, you can ask someone if they smoke or if they have a pet and they easily can lie to you. But here, as someone’s primary physician, you can see not only the physical medical aspects but the psychological medical aspects as well. Do you feel tension the minute you walk into the room? Are people in a mentally healthy environment, or do we need to get [them] to a psychologist. There are so many advantages to the system that we can take back and apply to the communities where we live.

Akua Brown minored in Spanish at San Francisco State University, and spent most of her first two years in Havana learning the Cuban vernacular and testing her Bay Area ideal of the Revolution. 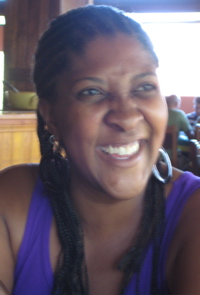 The education system here is excellent; there is very little homelessness. Everyone has a right to free health care… up to the most specialized needs. Neurosurgery, open heart surgery, cost nothing to the people. And the fact that a government with so little financial resources is able to do this says that the United States can do so much more… And without the debt that most medical students graduate with, we won’t be afraid to start our own projects and programs without necessarily needing the money to pay back the loans and the things hanging over our heads. Living here for six years, I think we have learned to live a simpler life with bare necessities. I ride the bus, I hitchhike, I buy from the community market. I’m not complaining–home is comfortable, but this is livable.

Akua Brown in conversation with Chris Lydon savoring the coffee at El Ajibe in Havana, December 19, 2008

The practical visions of these blessedly gifted women brought to mind Ralph Waldo Emerson‘s indomitable “world spirit.” Entering the second half-century of both the black freedom movement in the US and the Socialist revolution in Cuba, each with its ups and downs, these very American young women would remind you that grand ideals, the best we have, can prevail. “Things seem to tend downward, to justify despondency, to promote rogues, to defeat the just,” as Emerson wrote at the end of his essay on Montaigne; or the Skeptic. “Although knaves win in every political struggle, although society seems to be delivered over from the hands of one set of criminals into the hands of another set of criminals, as fast as the government is changed, and the march of civilization is a train of felonies,- yet, general ends are somehow answered. We see, now, events forced on which seem to retard or retrograde the civility of ages. But the world-spirit is a good swimmer, and storms and waves cannot drown him…”