We’re on a digressive walk and talk here through a master collection of those Soviet posters we all half-know and half-recoil from: those cult images of Lenin in the Twenties, Stalin in the Forties and Fifties, the icons of flawless Russian workers and rapacious capitalist pigs. The pigs were Us, of course, but the over-the-top images are long ago and far away enough to bear a fresh look. We are looking and listening with Abbott (Tom) Gleason, the Russian historian at Brown University, who pulled together this show of 20th Century caricatures, cartoons, broadsides and calls-to-arms at the Bell Gallery on the Brown campus. History and humor and beauty, too, are threaded through these posters — and something like a pop version of the evolution of modernism in Russia’s visual arts. In our own meltdown moment toward the end of 2008, there’s an invitation here to reflection and introspection that we might not have been up to before this. As Tom Gleason writes in a catalog essay: 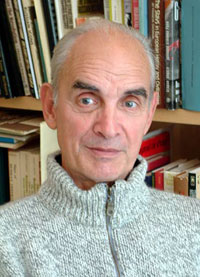 Tom Gleason: we can afford to look now

It certainly cannot be proclaimed that the various visions of the enemies of the Soviet world — these posters and especially the cartoons and satirical drawings — “hold a mirror up” to Western or American society in any straightforward way. Soviet and American cultural differences were enormous and no doubt propaganda was a good deal more focused and purposeful on the Soviet side. But especially in an age in which the worldwide image of the United States is at an all time low, it is interesting to confront these critical images from an earlier time, now emptied of any serious, practical challenge. Do we want to simply write them off as Communist propaganda? Or ought we to ask ourselves whether we can learn anything from contemplating such criticisms soberly?

Tom Gleason in Views and Re-Views: Soviet Political Posters and Cartoons, Then and Now