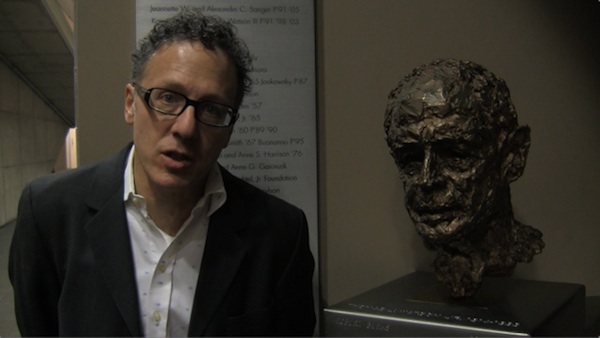 Advertising confirms Thomas Levin‘s observation that, strange to tell, we have come to embrace Orwell’s worst nightmare in 1984, universal electronic surveillance. A Kenneth Cole billboard in Manhattan makes the unembarrassed point that “On an average day you will be captured on closed-circuit television camers at least a dozen times. Are you dressed for it?” Another print ad proclaims: “Only one out of every 10 New Yorkers who owns a telescope is interested in Astronomy.”

Bob Herbert in the New York Times revealed last week (“Watching Certain People”) that the New York Police Department has stopped, frisked and catalogued just under 3-million people in the city over five recent years — the vast majority of them black or Hispanic and innocent of the slightest offense. “It’s a gruesome, racist practice that should offend all New Yorkers, and it should cease,” the columnist avers, but the people’s outrage seems slow in building.

With Tom Levin, a media theorist at Princeton, we are catching up with not just the everyday “fabulousness” of “surveillent narcissism,” but a wider wave of misgivings about the digital information revoluton — questions, complaints and reassessments being raised by, for example, Jaron Lanier, Daniel Gelernter and Jonathan Zittrain, among others. “The only hope for social networking sites from a business point of view,” Lanier writes, “is for a magic formula to appear in which some method of violating privacy and dignity becomes acceptable.”

So we are getting a broad-brush review here in James Der Derian’s Watson Institute classroom at Brown of the “data shadows” — the electronic profiles of all of us that can now be bought and sold; of the “surveil me, please” mentality that builds our Facebook files; of the outsourcing of knowledge and memory to Google — and Nicholas Carr‘s question whether Google is making us stupid.

Tom Levin is an intrepid activist who refuses to give up an electronic signature at any cash register and who likes to give phony email addresses when the wrong people ask for his. And still he deplores most of the “technodystopic whining” in the air. His mission is bringing up the abysmal level of digital literacy, recalling Walter Benjamin’s line in the Thirties that people who cannot “read” a photograph are “the new illiterates.” The people Tom Levin worries about today are those of us who forget that the data we’re giving up these days will be in somebody else’s hands forever.