Rae Armantrout, this year’s Pulitzer Prize poet, calls her stance “quizzical.” Fellow poets and critics write of her “oppositional temperament” (Steve Burt), of an impulse “to countermand, rather than to express” (Dan Chiasson). She is speaking in our conversation of the gesture of resistance that runs through her poems — of a habit of dissent and a lifetime of “talking back to the world when it’s bothering me.” Talking back, among other things, to her Fundamentalist upbringing, to the Vietnam war, to the diagnosis of an exotic cancer in her system, to advertising catch phrases and TV news. Talking back to news formulas can be just a matter of quoting them: 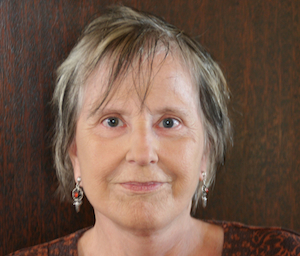 Often the effect of her play with cliché is laugh-out-loud gruesome, as in the poem “New”:

is the new black,

is the new Antigua,

Dan Chiasson’s New Yorker review had me braced for “some tantalizingly hard poems,” and for “the most genuinely experimental” poet since John Ashberry won the Pulitzer in 1976. Her voice is disarming, though, and her teaching-reading manner is modest, maternal, clear. As in her account of the famous, or infamous, Language School of poets and poetry she’s been associated with, in and out of the Bay Area since the Seventies:

We were and are a group, a social group, a community of poets with Cold War childhoods who came to maturity in the age of Vietnam. We were politically on the left, as so many young people were, and we were very much estranged from what the government was doing and suspicious of the rhetoric of the Cold War and of the Vietnam War. I think that suspicion of rhetoric and public discourse was one thing that held us together and that we all share, maybe still. As we challenged each other and influenced each other, various styles developed. I mean, I was kind of always a minimalist. I had written poetry since I was in elementary school, and I was writing poetry when I first went to Berkeley and when I first met Ron Silliman. He was the first of what would later be the Language Poets, and he was a college friend of mine… I do think that I do have elements in common still with the Language Poets, and I think that it’s something about the way my poems jump from thought to thought or image to image without explicitly narrating the connection between. That kind of juxtaposition. Which actually you can see all the way back into modernism, but it’s something that also became very much a hallmark of Language Poetry…

Q: What talent would you love to have that you don’t?

Oh, I’d love to be able to sing, to really belt out a blues song. That’s a simple one for me. I can’t carry a tune, and if I could have, maybe that’s what I would have done, because I’d love to do that.

Q: Who do you think of as fellow travelers in other mediums, that could be sculpture or music or dance or painting? Of all time. Who’s got Rae Armantrout’s spirit out there under a different name?

Well in fiction it’s easy. That would be Lydia Davis. She and I really are on a wavelength I think. We communicate very easily. That’s all I got.

Well, I like the Beckett characters like Molloy or Malone. You know, the I-can’t-go-on I’ll-go-on people. And of course there was the narrator in Swann’s Way who is unnamed. I think later in the series of books he is referred to as Marcel, which was Proust’s first name of course.

The keynote… E sharp. No. A minor key. I think probably being quizzical, questioning things, doing a double take, going, huh? That would be my keynote.

Q: When you walk down the street, Rae Armantrout, what do you think people see?

People don’t see me, because I’ve got on my invisibility cloak. No, because I’m an older woman. I don’t think people are looking at me.

Q: What quality above all do you look for and love in somebody else’s poem?

Fierceness. Speed. Quickness. That’s why I don’t do that filler stuff we were talking about earlier. Grace, actually. Sonic pleasure is important to me. And surprise. When something surprises me, when there’s a word that seems right but you didn’t see it coming at all. That.

Q: You’ve been through the big scare already, but how would you like to die when you do?

Well you know, because I’ve been through the big scare already, I guess I’m not going to give a fanciful answer to that. I’m going to say I’d like to die in a way that was not in pain. I would like to die when I chose, you know. I actually wish that Dr. Kevorkian was still working, because I would like to die from an overdose of morphine I think. So. And surrounded by people I love.

Ooh. My motto is never have a motto. Mottos get you in trouble. I’ve got a Dickinson quote about that actually that might fit. “Experiment escorts us last / His pungent company / Will not allow an Axiom / An Opportunity.”