Rosanna Warren says it’s a tremendous relief to meet people who know her work and don’t know that she’s the daughter of the triple-threat poet, critic and novelist Robert Penn Warren (1905 – 1989). He was a Kentuckian, and a Louisianan by virtue of his masterpiece, All The King’s Men. But Rosanna is also a Parisian, a child of the lycee, of European languages and the classical tradition going back through her early favorites, Blake, Tennyson and Housman, to Sappho, Catullus, Horace and Virgil. Antiquarianism is not her interest, but rather the fierce modernizing agony of fitting experience to architecture. “Yes,” she insists in conversation, “I think of poetry in a violent way. I want to pull out an animal’s heart while it is still beating!” The poetry she reads to us is filled with near violent conflicts: tenderness and rage, restriction and explosion, stress and death. She speaks, she says, to the agonies and confusions of a flailing, failing American empire. 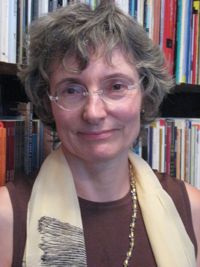 A: The poems I grew up on: Blake, Tennyson and Housman. I remember being at home alone and almost at random taking down a volume of Poe. I read “Annabel Lee” lying down on my tummy in the library. This was the first time no one had given me a poem and I wanted so badly to have it—memorize it, dance to it. It felt like a theft.

Q: Which talent would you like to have that you don’t?

A: Matisse. He was bringing to the two-dimensional canvas a three-dimensional awareness, he is making wholeness on a flat surface. I’m not even speaking of his extraordinary sense of color, in which he is, I believe, unrivaled: a gray by Matisse is a work of genius, let alone his reds.

Q: What is the state of the art, in our time?

A: I think it’s exciting. I do think it’s international — I read greedily poetry from Ireland, from England, from the Caribbean, from North America. The heterogeneity of what’s being composed is quite thrilling.

A: I imagine that I am perceived as a slightly vague-looking middle-aged matron trying to look respectable.

A: Painlessly. I’m a coward.

Q: Who’s the audience in your head as you write?

A: My first intimate sounding boards are the poets I love from the past. So, Sappho, Catullus, Baudelaire, Hardy… I just imagine what sonar my poems would send of to them, to their poems.