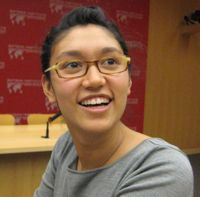 Chicagoan poet Regie Gibson places himself “somewhere between page and stage,” writing and speaking about life, art and philosophy. He won the 1998 National Slam Competition and founded the Church of The Funky Word, a literary and musical arts ensemble utilizing ancient, contemporary and original literary text combined with world music. He has taught, lectured and performed in seven countries. 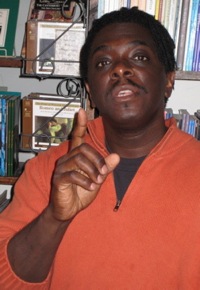 Q: Give us the poem that got you into the game.

Q: What’s your preferred mode of delivering a poem?

A: Somewhere between page and stage. We’re creatures of sound. We listen before we’re born.

Q: Who’s doing or did your kind of work in other arts?

A: I lean towards the shamanic.

Q: What talent would you most like to have that you don’t?

A: Facility with higher mathematics. Ability to play violin.

Q: What’s the general state of the art?

A: On the upswing, especially after 9.11. People turned to poetry for succor …

Q: What do you learn from high school students?

A: Stay honest— they can sniff when you’re not.

A: “We’re individual flames that tend to burn the brightest together.”

Click to hear Regie speak more of his work.