Craig Smith made glorious music, and wonderful conversation about it, too.

For more than 30 years, Craig Smith was soul and spirit, secret hero and standard bearer — the conscience and great affirmer of Boston’s marvelous musical world. And ever a generous “natural” on radio and television with me. 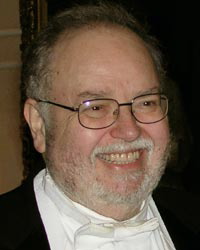 When he was rehearsing a grand production of Bach’s St. Matthew Passion in the late 1990s, I asked him how we might make a call-in radio show of it. He said in so many words: why don’t you just ask me to argue that the St. Matthew Passion is the greatest of all human accomplishments, by one or many. Meaning explicitly: greater than the pyramids at Giza, greater than baseball, greater than The Brothers Karamazov or the United States Constitution. And so we did, for an hour that lives in many listeners’ memories. By the end of the program, he had convinced us all, including a few dissenters who’d thought of suggesting that maybe Bach’s B-minor Mass was a mountaintop even higher.

A few years earlier, for WGBH-TV, we had engaged Craig Smith on his life at the Emmanuel Church in Boston’s Back Bay. I like the title we gave it: “A Way to Live: Craig Smith’s Bach Project,” because it suggests (as many have been saying since Craig’s death last week) that his music was a voluminous account of his whole self. The distinctive beauty of his conducting was that he gave us the whole Bach: the darkness and doubt, and the suffering in the salvation; the “Jesu Joy of Man’s Desiring” but also the heart-rending Cantatas he reset with Peter Sellars for the sublime solo voice of Lorraine Hunt Lieberson, dying on stage: No. 82, “Ich Habe Genug,” and No. 199, “Mein Herz Schwimmt in Blut.”

Craig Smith, the silent conductor, also loved the role of radio explainer and color-commentator. “Don’t worry about anything, Chris,” he said in one of our last outings. “I’ll keep talking.” His specialty (as you will hear in “A Way to Live”) was pinpointing the match of musical devices with turns of meaning in a text. And always his talk became a happy tribute to somebody else’s genius. His piano teacher who became his disciple, Russell Sherman, caught it perfectly. “Everything he touched he cherished, and relished with an incredible tenderness, conviction, and belief,” Sherman said on Craig Smith’s death. “Everything he did, he did with flair, a cherubic smile, and a Mozartean sense of absolute pleasure and happiness in the task itself.”